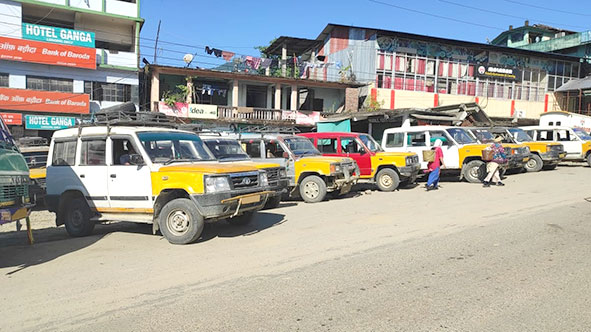 ITANAGAR, Nov 28: Commercial passenger vehicles service within the township area was one of the first businesses to take a hit from the Covid-19 lockdown in March this year. Many were left unemployed and had a difficult time making ends meet as they ate through their savings or survived on the government’s ration donations.

The vehicles came back on the roads after an order was issued on 2 August by the district administration to allow these vehicles on the roads with certain Covid standard operating procedures (SOP). The SOPs included social distancing, compulsory wearing of masks (passengers and drivers), personal hygiene, and use of sanitizers by drivers.

Since then, several passengers have complained of the revised exorbitant fares and claimed that the taxi drivers do not follow the SOP, especially the social distancing norm.

For Trekkers, the fare for Itanagar to Naharlagun has doubled from Rs 50 to Rs 100, and the Tempo drivers have also increased their fare by Rs 10. The buses for Banderdewa have increased their fare from Rs 80 to Rs 200, and autorickshaws continue to charge the same fare as before the lockdown, the drivers said. Any autorickshaw that leaves the stand charges a minimum of Rs 100.

Passengers complain that the revised fares are unjustified if the vehicles travel with full seating capacity (10 people each in Tempos and Trekkers).

“Many of the Trekkers and Tempos make us sit tightly. And even other passengers get in even after seeing that the vehicle is beyond its revised seating capacity. I have picked arguments with the drivers on several occasions. I do not have a problem paying a little extra if social distancing is maintained, but what are they charging the extra amount for if they are carrying the same numbers of passengers as before,” a passenger said.

The Trekker and Tempo drivers on their part claim that they carry only five and four passengers, respectively, from their stands.

“Many passengers say they won’t pay the full amount if we carry too many people, so we do not pick up extra passengers. But some people get down on the way, so we do pick up a few extra passengers on the way at times. The ones who always fill their seats to full capacity are usually those vehicles who do not stop at stands and run non-stop,” a Trekker driver said.

Even as most Tempo drivers claim that they only take four passengers, this reporter noted that many Tempos were travelling with two people seated beside the driver, three people in the centre seating area, and one or two people in the back seat.

“We have been ordered to pick only four passengers, but when someone gets down in between, we cannot make up our costs and have to pick up extra passengers,” a driver who has been driving a Tempo for two years said.

While buses are expected to offer cheaper rates, travelling from Itanagar to Banderdewa by bus costs Rs 200, which is around the same rate when one takes Tempos and Trekkers. There is, however, the convenience that passengers do not have to change vehicles.

A bus conductor said that the buses only take 10 people, no matter what the seating capacity of the bus, so that each bus gets passengers.

“We want to reduce the prices, but we have been getting fewer passengers because of the Covid tests at the entry gate. We are also not allowed to stop anywhere in the town by the other commercial vehicles because people prefer taking buses to reduce costs, but since we have reduced our intake capacity, we have had to increase our prices to make up for the costs,” a bus conductor said.

He said that they charge regular travellers, who travel to their offices, Rs 50 and no fare is charged for children below the age of 10.

While the Trekker and bus drivers assured that “if Covid-19 goes away, we will start picking up the usual number of passengers and will likely reduce the fare,” autorickshaw drivers called out the government for the rising prices.

On whether autorickshaws would consider installing automated fare meters, an autorickshaw driver said, “The government should first regulate the prices of fuel and other commodities. Reduce fuel prices. It keeps increasing every month. Repair the highway, so that the traffic can be controlled. Getting stuck in traffic consumes a lot of fuel. All our earnings go in the maintenance of our vehicles because of the bad roads.”

A passenger said, “Petrol prices may have increased, but they have not doubled. The commercial vehicles should go back to their old fares if social distancing is not maintained. There should be a proper procedure. They should not be increasing the fares at their whims and fancies.”

There are over 400 Trekkers, 600 autorickshaws and 700 Tempos in the capital, a driver claimed.