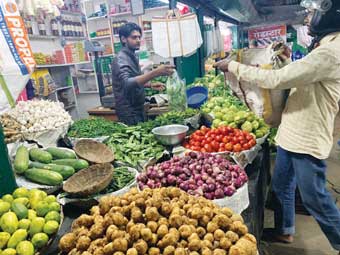 ITANAGAR, 3 Dec: The winter often offers a bountiful supply of vegetables, making it possible even for low wage earners to survive. However, Itanagar and Naharlagun have a different story to tell. The prices of vegetables have skyrocketed in the Itanagar capital region (ICR). The prices vary from vendor to vendor, but all at high rates.

It is alleged that the vendors sometimes fix the prices of vegetables themselves for their own profit.

“Rs 30-40 has no value in Itanagar. We cannot even buy one kilogram of potatoes with Rs 30. How can poor labourers like us survive in such an expensive atmosphere?” said Mridul Pegu, a daily wage earner.

It is said that most of the vegetables come from either Assam or Meghalaya, except the local greens and herbs, which are mostly brought from Bomdila, Seppa, Sagalee, Yachuli, Palin, Ziro, and other parts of the state.

The residents of the ICR have been left with no choice but to buy vegetables at unregulated and exorbitant prices.

“Assam is just 30 kilometres from Itanagar. However, the vegetable vendors in Itanagar often charge double the prices in Assam,” said a middle-aged man who was bargaining for two kilograms of tomatoes at the Akashdeep vegetable market.

“None of the vendors is abiding by the prices regulated by the district administration. The vendors are fixing prices at their own whims,” said another customer.

The ICR district administration had updated the prices of vegetables and meat in July. Since then, there has been no review of the prices of essential commodities and vegetables.

On being asked why vendors are openly defying the administration’s price regulation, a shop owner, G Gosh said, “If we go by the DC’s rate, the vendors of the capital region would be deserted.” He claimed that the vendors have to pay exorbitant charges for transporting vegetables from Assam to Itanagar.

However, contrary to their claims, Capital Region Agriculture Produce Marketing Committee Member Secretary Dolang Akom stated that the prices are regulated “considering the price at the source, transportation charges, pre-assessment and post-assessment profit and loss, perishable and highly perishable nature of commodities, minimum profits and loss of retailers, etc.”

Until the prices are properly regulated by the district administration, the residents of the ICR will have to survive on pricey vegetables.