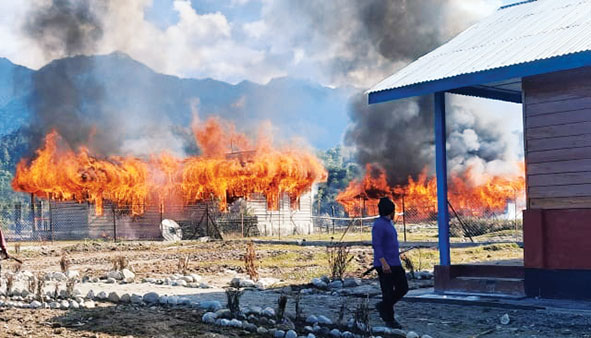 ITANAGAR, 11 Dec: Simmering tension is reportedly brewing in Vijoynagar in Changlang district after agitated public and students torched government buildings and offices there on Friday morning, demanding immediate debarment of ex-Assam Rifles (AR) settlers in Vijoynagar from participating in the panchayat election, and shifting of the settlers out of Vijoynagar.

Police sources informed that at around 8:30 am on Friday, Yobin students, youths and public, led by the All Yobin Students’ Union (AYSU), burned down the EAC office, the post office and the Special Branch (SB) office, and ransacked the Vijoynagar police station.

“They were around 400 in number and came from Gandhigram with daos, lathis, bows and arrows, shouting ‘Hamari maangey puri karo,” the sources said.

The AYSU has been demanding immediate removal of the panchayati raj rights extended to the ex-AR settlers in Vijoynagar, and shifting of the settlers out of Vijoyanagar.

The police sources informed that the civil helipad was also partially damaged by the agitated public. It is reported that, after burning down the buildings, the crowd left for Gandhigram village.

There was no report of loss of human lives. The police stated that the situation is tense but under control.

The agitated mob reportedly outnumbered the police personnel stationed in Vijoynagar. However, additional force is being airdropped for maintaining law and order there.

TCL DIGP Kime Kaming, IGP (Law & Order) Chukhu Apa, SB SP John Pada and Changlang SP Mihin Gambo have rushed to Vijoynagar. The senior officers will camp there for the next few days, till the situation returns to normal.

In an unverified message, AYSU president Ngwazosa Yobin stated that the union launched the agitation “due to false assurance made by the state government” and because of the failure of the government to meet the union’s longstanding demand for removal of panchayati raj rights from the non-APST ex-AR settlers.

Ngwazosa stated that Friday’s agitation was “the first phase of agitation,” and that it would be continued if the government fails to address the union’s demands.

All Arunachal Pradesh Anti-Corruption Students Union (AAPACSU) president Tana Ganesh Tara, who along with the AYSU has been spearheading the move against extension of panchayati rights to non-APSTs, appealed to the government to resolve the issue at the earliest.

In November 2019, the AAPACSU had launched an indefinite hunger strike, demanding immediate deletion of the names of ex-AR settlers from the panchayati raj electoral roll. Home Minister Bamang Felix had intervened and assured to resolve the issue.

Meanwhile, Felix has expressed anguish over the destruction of public properties in Vijoynagar. Terming the incident unfortunate, he said such antisocial acts would not be tolerated and strong action would be taken against those responsible for it.

The home minister expressed shock over the violence.

“We accepted the demand of the Yobin students’ union and accordingly the panchayat election was postponed. Whatever happened is unfortunate and violence has no place in a modern society,” said the home minister.