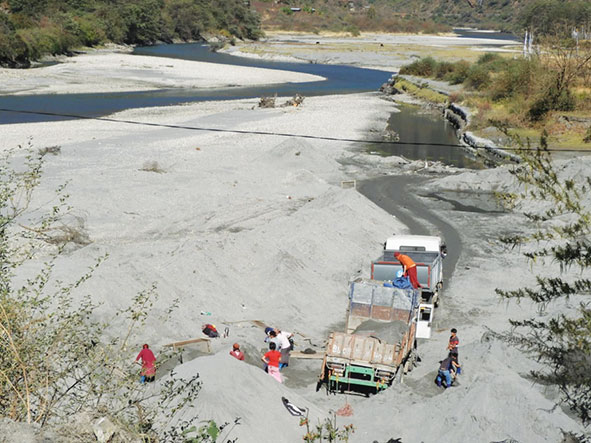 ITANAGAR, 11 Dec: Three black-necked cranes arrived in Nyamjang Chhu in Zemithang in Tawang district on 1 December but made a hasty retreat after a few hours, following disturbances.

The WWF’s Kamal Medhi said that the cranes may have been disturbed as some people flocked to the area to shoot videos of the revered birds of the Monpas, and that the 3 km stretch of the wintering site of the cranes are heavily disturbed because of sand and gravel mining. The cranes – two adults and a juvenile – have not been sighted again since 1 December.

A short 3 km stretch of the Nyamjang Chhu, between Brokenthang and Zemithang, is one of the only two regular, long-term wintering sites of the bird in India, but mining activities along the stretch have led to severe disturbance.

Medhi said that mining is still ongoing in the habitat as it is a source of income for the local communities.

He said that state agencies should intervene and come up with a “strategy to meet both ecological needs as well as local livelihood.”

Medhi said that the way forward could be zonation of the mining areas, so as not to disturb the 3 km critical habitat. He advocated stopping mining altogether during the period in winter when the birds call Pangchen valley home for a duration of upto three months, starting mid-November.

Neeraj Vagholikar of the environment research and advocacy group Kalpavriksh said, “The arrival of the black-necked crane once again for its annual wintering along the Nyamjang Chhu river is not only auspicious for the locals in Tawang but a reason for celebration for all of us across the country, especially since this precious habitat was saved by the people of Arunachal after a hard-fought legal battle.”

”Their stand was vindicated when the Wildlife Institute of India (WII) in its study also recommended that the 780 mw Nyamjang Chhu project be dropped and the habitat protected. It is now important that the state government works closely with the local communities and organizations working in the area to address other threats and ensure long-term ecological security of the habitat, as well as livelihood security of the locals,” said Vagholikar.

The biggest threat to this 3 km stretch of the river where the bird winters was averted when the National Green Tribunal (NGT) suspended environmental clearance for the 780 mw Nyamjang Chhu project in April 2016. The barrage for the project would have submerged this area. This was based on intervention by the Save Mon Region Federation.

The NGT in a landmark judgment on 7 April, 2016, had suspended the environmental clearance granted to the Nyamjang Chhu project’s barrage site, submergence of which will destroy the wintering site of the bird. The appeal had been filed by the Save Mon Region Federation.

The environment impact assessment report on the project had failed to record the importance of the wintering site, and in fact did not mention the black-necked crane even once.

The NGT in its judgment further directed the WII to conduct an impact assessment of the project on the black-necked crane.

The report submitted in 2019 has recommended that the project not be built, and that this site is protected.

Although the major threat from a hydropower project has been averted, sand mining remains a concern in the area. The district administration had suspended sand mining on earlier occasions during the wintering season. However, there has been no long-term solution.

Conservationists say that the state government needs to consult with the local communities and offer alternative livelihood options to safeguard the natural heritage of the state, including acting on the recommendations of the WII report, and work towards community-based models of conservation, building on work already done in the area by the local communities, who have declared two community conserved areas in Pangchen valley.

The WWF India has been working with the communities in the area, including in monitoring the wintering of the black-necked crane.

Medhi said the youths of the area are active in conservation of the habitat site but there is a need for livelihood option, so that the 3 km site is not disturbed.

The 3 km site is rich in sand and boulders.

As reported earlier, in 2017, due to habitat destruction in the 3 km stretch because of sand and gravel mining and construction, the cranes did not land, though they had come as far as their wintering habitat. The same year, the black-necked cranes did not arrive in Sangti valley, which is the other wintering site, in West Kameng.

Between 2009 and 2013, not a single crane had come to Sangti valley. Experts say that it was because of habitat destruction and a change in the cultivation pattern in that area. High-tension power lines also run through the entire stretch of the habitation of the cranes.

In 2016, two cranes were killed when they got snagged on a high-voltage power line in Sangti valley – the second such incident since 2007. In 2008, a black-necked crane was killed by an Arunachalee government employee.

The cranes are revered by the Monpas as the embodiment of the 6th Dalai Lama, His Holiness Gyalwa Tsangyang Gyatso, born in 1683. He wrote about the majestic bird in poems and used it as an imagery of his return.

The bird has been spotted in Chug valley, and by the Doblo river in Shergoan in West Kameng too.

The Apatani valley was once the favourite site of these birds. According to Rajiv Gandhi University’s Centre with Potential for Excellence in Biodiversity, a record 27 cranes visited Ziro in the Apatani valley in 1954. But they have not been seen in that region since the ’70s due to human interference, according to the centre.

The birds that fly in from Tibet at the end of every year are protected under Schedule I of the Wildlife (Protection) Act, 1972, and are in the ‘vulnerable category’ as per the IUCN.

According to the Wildlife International, there are around 11,000 such cranes in the world.