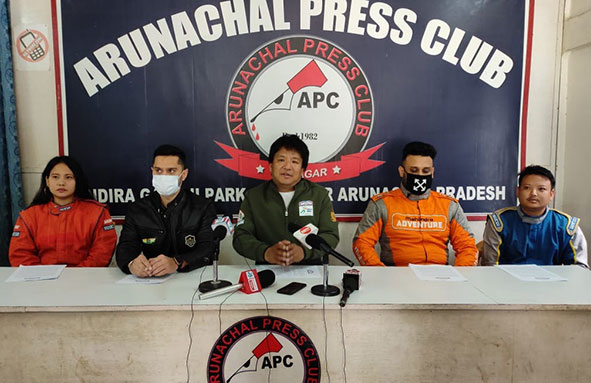 ITANAGAR, 14 Dec: The Indian National Rally Championship (INRC)-2020 will be flagged off with the Rally of Arunachal-2020 from Chimpu on 16 December.

Being organized by the Motorsports Club of Arunachal (MCA), in association with Ramakrishna Race Performance, and promoted by the Champions Yacht Club, the rally will be held from 16 to 20 December under the aegis of the Federation of Motor Sports Clubs of India.

Briefing reporters here at the press club on Monday, MCA president Lhakpa Tsering said, “This is a very proud moment for the MCA and the state as we are kicking off the inaugural calendar event of the INRC from Itanagar in Arunachal Pradesh. This is the pinnacle of Indian rallying,” he said.

A combined 86 drivers and navigators and a crew of over 200 backing them will be participating in the rally.

For the first time, four drivers from Arunachal are taking part in the event, including one female driver. They are Phurpa Tsering, Naku Chada, Hage Bittu and Nabam Asha.

The racers will cover a distance of nearly 200 kms, driving back and forth between Chimpu and Hollongi.

The rally will be flagged off for the special stages from the service park in a controlled environment on the national highway for the thrill of the spectators and the benefit of the sponsors.

Tsering extended gratitude to the governments of Arunachal and India, the departments of tourism and sports & youth affairs, and others engaged in making a large event like this a success.

Welcoming both Gill and Ghosh to Arunachal, Khandu expressed optimism that “the event would work as a catalyst to boost tourism in the state.” He said that, with its geographic terrains, Arunachal has all the potential to become the next destination for adventure sports.

Congratulating the local drivers, Khandu expressed happiness that local youths, including girls, are exploring new grounds to hone their talents. He said “this is proof that the youths of Arunachal have all the potential to rub shoulders with the best in all fields.”

The chief minister is scheduled to flag off the championship on the 16th. (With inputs from CM’s PR Cell)