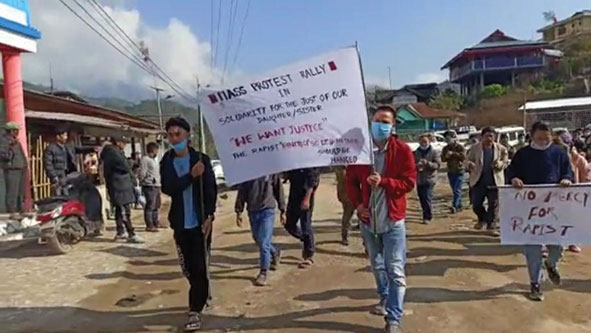 RAGA, 16 Dec: In yet another rape case, a 14-year-old student was allegedly raped by her school principal at Raga in Kamle district.

The alleged accused has been arrested on Tuesday and a case has been registered against him under IPC and POCSO Act, informed the investigation officer.

He was remanded to judicial custody at Ziro in Lower Subansiri district on Wednesday.

Hundreds of people, including women and students on Wednesday, joined a protest rally at Raga in solidarity with the victim’s family and demanding capital punishment for the rapist.

Kamle DC Hengo Basar gave assurance to the protesters that the school will be sealed after constituting a board. The DC also assured them that the accused person would be punished as per the provisions of the laws.

SP Rahul Gupta appealed to the people to cooperate with the police in the investigation so that charge-sheet can be filed at the earliest.

The All Nyishi Youth Association (ANYA) on Wednesday also vehemently condemned the incident.

“It is a heinous crime and very disheartening that girl children are not even safe in the schools,” the ANYA said.

The association said that the state government should initiate safety measures to prevent crime against girl students in the schools of Arunachal Pradesh.

This is the second reported case of rape of a minor this month. A 10-year-old was allegedly raped in Longding on 6 December.