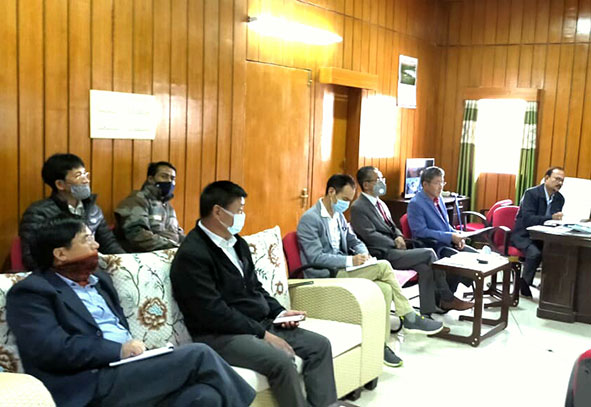 No poll in Dibang Valley, polling in all stations in East Siang

ITANAGAR, 18 Dec: The State Election Commission (SEC) on Friday reviewed the overall preparedness for the elections to the panchayat and municipal bodies in the state.

The date of polling is 22 December, and the counting of votes will be done on 26 December. The elections for the panchayati raj institutions and the municipal bodies of Itanagar and Pasighat will be held in a single phase.

During the review meeting with all the election observers, DCs and SPs through videoconference, State Election Commissioner Hage Kojeen along with SEC Secretary Nyali Ete and Deputy Secretary Habung Lampung asked them to ensure free, fair and peaceful elections.

Kojeen asked them to “take special care on violation of model code of conduct, SOPs on Covid-19 protocols, including separate Covid-19 SOPs issued by the SEC for all the polling personnel and political parties and candidates.”

Kojeen also took stock of the readiness of polling stations, appointment of polling personnel and their training, law and order issues, effective communication arrangement, movement of polling teams, arrangement of counting halls, etc, during the meeting.

All the DCs, poll observers and SPs gave feedbacks.

The SEC informed in a release that it is for the first time that observers have been appointed for each district to oversee the electoral process in the districts. “There is no report of major violations of MCC and law and order issues so far in all the districts,” he said.

The ballot papers printed for all the panchayat raj constituencies have been collected by all the districts, and the commissioning of the EVMs for the Itanagar Municipal Corporation and the Pasighat municipality has also been done, the release said.

“There will be no election in the entire Dibang Valley district as all the segments in both zilla parishad and gram panchayat went unopposed,” the SEC said, and added that East Siang is the only district where polling will take place at all 120 polling stations.

As many as 110 gram panchayat segments in the entire state fell vacant due to various reasons. The SEC will take a final call on conducting bye-elections in those constituencies after the electoral process is over in the current phase of election.

Meanwhile, the SEC has appealed to all citizens, electorate, political parties and candidates to extend support and cooperation to ensure free, fair and peaceful local body elections in the state.