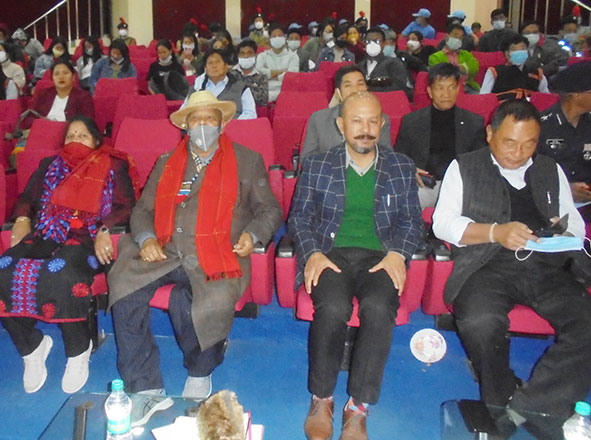 Attending the Brahmaputra Aamantran programme organized by the Brahmaputra Board and Central Water Commission at Pasighat in East Siang district on Wednesday, Minister Kataria said, the central government is working to protect river-based civilization in the country.

Stating that Arunachal has abundant water resources, the minister urged water resource officials to use it in a productive way. He informed that the Central government through its ‘Jal Jeevan Mission’ has set a target to cover every household with potable pipe water within 2024.

Speaking on social welfare schemes taken under the Social Justice & Empowerment, Kataria said he has been working hard to make the country free from narcotics and drug addiction.

The central government has approved Rs 69 thousand crore for SC & ST scholarship, the minister said and added that “it is all set to help the poor meritorious students, who intend to study in foreign universities.”

“We are all set to grant financial help worth Rs 50 Lakh to Rs 1.5 crore to those poor and meritorious students”, he said.

Minister Kataria said that the Central government is funding to organize river festivals in order to make countrymen aware about the importance of the river waters for survival.

“After the Ganges, the water resource ministry is taking steps to protect the Brahmaputra River from water pollution,” the union minister said.

The union minister further said that the Central government has increased fund allocation for conducting river festivals, besides protecting the rivers from dirt and said that he is committed to prevent Ganges River from pouring dirty water during next Kumbh Mela (due in March, 2021 at Haridwar).

Speaking on the occasion, Pasighat West MLA Ninong Ering said that neighbouring country China is constructing a big dam over the Tsangpo River at Yunan province, thereby trying to divert Siang water. He urged Jal Shakti minister to look into the matter deeply and strongly oppose ‘the Chinese conspiracy’.

Among others, officials of Brahmaputra Board and Water Resource department gave presentations on various river related topics, including weather forecast and early flood warning mechanism with reference to impact on human civilization and biodiversity.

The Brahmaputra Aamantran programme, pertaining to a moth-long river rafting expedition (from Siang at Gelling to Brahmaputra in Dhubri, Assam), started at Gelling on 23 December. It is collaborated by state’s tourism department, IIT Guwahati, NESAC Shillong, CIFRI (Guwahati), IMD (weather) and Inland Waterways Authority of India.