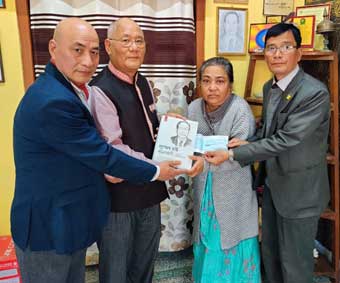 ITANAGAR, 3 Jan: Giving a befitting tribute to the acclaimed litterateur from Arunachal Pradesh, ‘Sahitya Surjya’ Lummer Dai was honoured posthumously by the Assam Government by bringing out the complete work of his writings in one volume.

It included all his novels, short stories, folk tales, articles written in both Assamese and English languages and editorials he had written for the state’s first daily ‘Echo of Arunachal’ as its editor.

The book titled ‘Lummer Dai’r Rachanawali’, edited by Sahitya Akademi awardee Jayanta Madhav Bora, was released during the inaugural function of the 33rd Guwahati Book Fair organized by the Assam Publication Board on 30 December 2020 by ‘Padmashri’ Yeshe Dorjee Thongchi in the presence of former Governor of Tripura and Meghalaya Tathagata Roy, Assam Chief Minister’s press advisor Rishikesh Goswami and other dignitaries and writers.

Speaking on the occasion, Thongchi, the president of Arunachal Pradesh Literary Society (APLS), said that it was the Government of Assam that had published the late writer’s first three books – ‘Udayachalar Hadu’ (a collection of folk tales), ‘Paharar Hile Hile’ and ‘Prithivir Hanhi’ – the first two novels in late 60’s of last century through the Publication Board of Assam.

“Had Assam Government not come ahead to encourage the young writer from the then NEFA late Lummer Dai, he would not have been able to establish himself as a great writer,” Thongchi said.

He thanked the Assam Government, especially Minister and president of the Assam Publication Board Dr Himanta Biswa Sarma, who took the initiative to bring all the writings of late Lummer Dai together, the Publication Board of Assam for bringing out the book on behalf of the family members and APLS.

“This has further immortalized the name of late Dai and bonded Assam and Arunachal Pradesh in secured way,” Thongchi opined.

Promod Kalita, the secretary of the publication board handed over a cheque of Rs 50,000 as the first instalment of the royalty of the book issued against late Dai’s better half, Nanni Dai to Thongchi along with a copy of the book for the family members.

While handing over the cheque and a copy of Lummer Dai’r Rachanawali to Nanni Dai in the presence of APLS general secretary Batem Pertin and former vice president Tokong Pertin, Thongchi appealed to the Government of Arunachal Pradesh to purchase the book for all the libraries of the state, including those of colleges and universities.