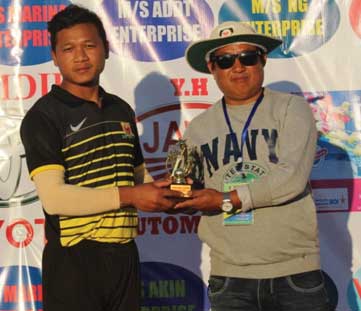 Doimukh set Sangdupota a target of 141 run to win. The team could manage to score only 125 in 20 overs, losing seven wickets.

Captain Abo Nabam, who claimed three wickets for 28 run in four overs, was declared man of the match.

Sagalee posted a challenging total of 196 run against Balijan. The team was bundled out for 113 in 17.2 over.

Techi Tiklee was adjudged as the player of the match for his all round performances. He scored 43 runs from 21 balls and claimed three wickets.

Earlier, Director of Sports Tadar Appa, who inaugurated the Papum Pare District Association (PDCA) ground for the tournament, said the PDCA’s endeavour will go a long way in producing future cricketers of the state and the country.