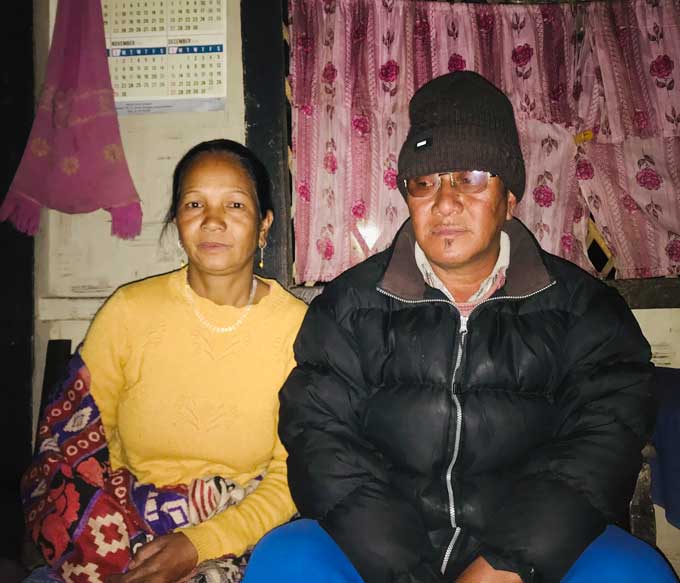 ‘Hurt by demand for our ouster. I don’t know any other home’

VIJAYNAGAR, 7 Jan: Thanmawia was barely nine years old when his father, an Assam Rifles jawan, flew the family to Vijaynagar in 1969.

His father, from Mizoram, was one of the 200 Assam Rifles personnel who were settled in Vijaynagar circle by the central government between 1967 and 1971. The family settled in Daragaon, one of the nine villages set up for ex-servicemen and their families. Many wanted to leave because of the tough topography, but were forcibly settled by the Assam Rifles.

The Assam Rifles personnel were promised 25 acres of land. None of them got the promised land. The highest is 11 acres, while most families have 5 acres, forcing many to leave the place.

His family did not get the land promised, but his father chose to stay back and raise his family in Daragaon.

Before settling down in Daragaon, Thanmawia’s father served in the Kibitho sector in Lohit, and of the seven children, Thanmawia and two of his elder siblings were born in Arunachal.

“I was born in Tezu while my elders were born in Kibitho and Hayuliang, respectively,” he says.

As the family expanded, the land wasn’t enough for all, so five of his siblings shifted to Lunglei in Mizoram. He stayed back.

“Daragaon is my home. I know no other home,” says the father of three children.

As some organizations are seeking ouster of the ex-servicemen and their families, known as ‘settlers’, from Vijayanagar valley, and are against their voting rights in local elections, Thanmawia is anxious and hurt at the same time.

A man of few words, he says that he is hurt.

“I am hurt… We have been voting as long as I remember,” he says. “Now the students are saying that settlers should go, which is hurtful.”

A rally was taken out by the All Yobin Students’ Union on 11 December last year. The rally, which was attended by over 400 people, passed through Daragaon village, which is adjacent to circle headquarters Vijaynagar, and the marchers demanded the ouster of the settlers and their exclusion from local polls. The rally turned violent with several government establishment burnt.

“When the rally was taken out, we left the village and hid in the jungle on the advice of the gaon burah. We came back,” he says.

His wife, Kamla Lusai, a daughter of a 1962 Sino-India war veteran, is equally hurt.

“My in-laws have asked us to relocate to Mizoram but this is our home…. Sometimes I feel like leaving, but starting afresh will be difficult as we don’t have enough money and the land that belonged to our family was sold after we settled here.”

Thanmawia says, “Where will I go? I will die here.”