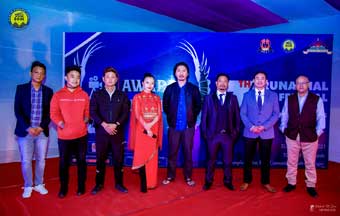 ITANAGAR, 10 Jan: The award for the best film in the 7th Arunachal Film Festival went to ‘Capital.’

The film took home most of the awards, including the awards for the best editing, best cinematography, best male actor (in the lead role), best actor in negative role and best male playback singer.

Tumken Sora, who played the lead role in the film, was adjudged the best male actor, while Pei Nilu Gumtu won the award for the best actor in a negative role.

DK Thungon won the ‘best director’ award for his film ‘Land of Bugun Liocichla.’ The film is based on the Bugun tribes of West Kameng district.

The film also snatched the awards for the best female actor and the ‘best music.’

The award function was held the at Amphitheatre of the Dorjee Khandu Convention Hall here on nine January, which was attended film artists from the entire state, including renowned artists of yesteryears Hage D Appa and Desom Beyong of Frontier Students.

Expressing happiness over the success of the festival, Hali Welly, organizing chairman of event said, “I am really satisfied with each and every member associated with the event as it was a success even during this pandemic time.”

“We believe that the door for the due recognition to the artists of the state has been opened by us by holding such an event,” Welly opined while sharing the good news of best director award winner DK Thungon’s selection in freeway film entry in 23rd UK Asian Film Federation.

He stated that the Arunachal Film Policy 2020 announced by Chief Minister Pema Khandu would be beneficial for the state’s filmmakers and artists, if implemented properly.

Organizing secretary Shambo Flago stated that the whole programme was made online due to the severity of the pandemic in the times. The award ceremony was made offline with the improvement of the situation as well as to hold an interactive session with all the state film fraternity.

He thanked the state government and department of information & public relations for helping the event to be a success.

Festival director Lobsang Chombey described the 7th Arunachal Film Festival a learning opportunity for the young filmmakers and artists. The films and documentaries that were screened online on the AFF social networking sites received good response internationally, he added.