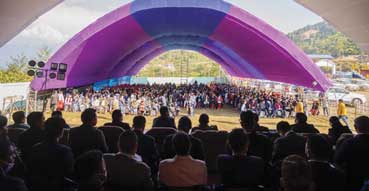 SEPPA, 10 Jan: The deteriorating condition of the Seppa-Chayang Tajo road was the centre of discussion in the 8th general conference of the East Kameng Social Welfare and Cultural Organization (EKSWCO) which concluded on Saturday at Chayang Tajo ADC HQ.

The 81-kilometre road has remained dilapidated for nearly four decades, ever since it had been laid.

The residents demanded expediting vigilance inquiry on the road, which is marred by alleged corruption.

The alleged murder of Toko Yame in Tawang, the education scenario in East Kameng district, the endemic mortgage system, waste management and rise of drug menace in the district were the dominant topics during the conference.

The EKSWCO is an organization of five communities, namely, Nyishi, Sajolang, Aka, Puroik and Galo of East Kameng district. It was founded way back in 1977-78.

Attending the conference as chief guest, Dirang MLA Phurpa Tsering assured to assess the status of the Seppa-Chayang Tajo road.

The MLA gave the assurance after being pressurized by the people for expediting of vigilance inquiry into alleged corruption of the road.

Tsering lauded the EKSWCO for its pan-Arunachal functioning and ideology and urged the people of East Kameng to keep up the spirit and guard it zealously. He also applauded the EKWSCO for constant effort of reformation in the district. The reformative steps in education, health and other social sectors such, as uplift of weaker sections, etc.

“I am deeply touched and amazed to see the way EKSWCO has been functioning, especially its reformative steps towards revenge and fine system and promotion of pan-Arunachal identity,” said Tsering.

“EKSWCO is one of the best NGOs in the entire state. The spirit towards reformation in the district and promotion of pan-Arunachal should continue,” he added.

Speaking on the topic, ‘My vision towards transforming Arunachal Pradesh into a sporting powerhouse with reference to East Kameng district’, Sports & Youth Affairs Minister Mama Natung stated that the Chief Minister Pema Khandu-led government is giving special attention to game and sports in the state.

Natung added that, under the leadership of Union MoS for Youth Affairs & Sports Kiren Rijiju at the Centre, Arunachal has been selected as one of the centres of excellence in the country, alongside with Manipur.

Seppa East MLA Tapuk Taku raised the challenges of Seppa township, particularly on concentration of urban population and traffic congestion in Seppa township, during his presentation on ‘Challenges of urbanization of Seppa and strategies for future – A leader’s perspective’.

“Empowerment must prevail in pragmatic form not in arrangement form. Youth should be empowered with quality education” exhorted Mangfi.

Outgoing EKSWCO chairman Dahey Sangno in his presidential address called for social and economic liberation of the Puroik people. Sangno stated that many Puroik people are still subjected to atrocities, especially during panchayat and general elections and many are still forced to work as bonded labourers.

Highlighting the journey of the EKSWCO as an organisation, Sangno said the EKSWCO does social engineering and promotes true pan-Arunachal campaign to create harmony among the tribes living in East Kameng district.

In the technical session, APCS officer Shankar Bagang deliberated on the topic ‘Youths – Realigning the orbit’.

Sharing his vision, the newly-elected EKSWCO chairman said, “Awareness on cash-for-vote and its impact in developmental activities, revenge and fine system on accidental cases, drug abuses to channelize the youth energy in right direction and uplift of weaker section of the society in the field of education, particularly Puroik community would be on my priority.”