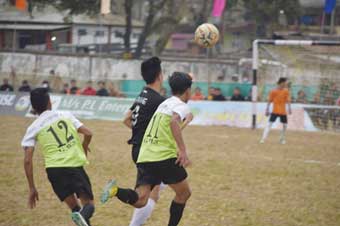 Birdoi Brahma scored all the four goals for Tawa Abo, while the consolation goal for Abo Bakha FC was scored by Tadar Lale.

Sawa Sporting Club will meet Thunders FC in the first semifinal while Bantaram FC will lock horn with Tawa Abo FC in the second semifinal. Both the matches will be played on Wednesday.