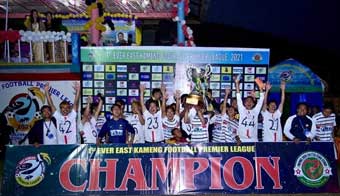 Bantaram Gyadi FC’s Tailyang Cosy was awarded as the ‘best player of tournament, while the award for the best goalkeeper went to Rilo Riang of Tawa Abo FC.

Gyammar Nikum of Sawa Sporting Club was chosen as the emerging player of the tournament.

The award for disciplined team was won by Sanghcha Ajing FC.