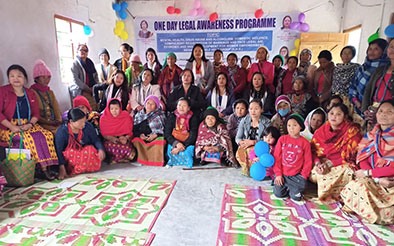 Radhilu Chai Techi said that Arunachal has more girl population than boys, “but when it comes to property and inheritance, boys are given more importance than girls.”

She said: “With the changing times, all these notions should be changed and girls should also be given equal rights over property and inheritance.”

Advocating better education for girl children, Techi said that equal opportunities should be given to girls to pursue higher education to make them independent and strong.

“In comparison to other states, Arunachal is still lacking in girls’ education and till today boys are given more opportunities to pursue higher education by parents than girls,” she opined.

She also called upon the gaon buras and gaon buris to judge without any bias, especially in cases related to women.

Techi further informed that the APSCW has approached the state government to increase the women’s reservation quota in the gram panchayat to 50 percent from 33 percent to strengthen women’s participation at the grassroots level governance. She also called upon women panchayat leaders to perform their duties sincerely.

Pointing out the ‘side effects’ of polygamy in the society, she said: “It is one of the main causes of domestic abuse against women.”

She also spoke on practice of “mithun exchange” which is prevalent in tribal societies and its negative impact on women’s life after marriage.

The programme was conducted by the APSCW in coordination with the Sagalee branch of the Arunachal Pradesh Women’s Welfare Society. (DIPRO)