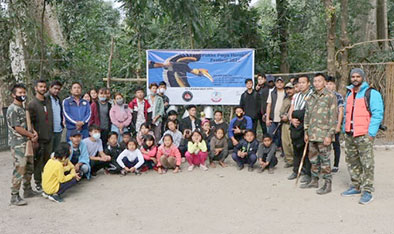 LEMMI, Jan 22: The three-day Pakke Paga Hornbill Festival, 2021 concluded on Wednesday with distribution of certificates of participation and prizes to the winners of various literary competitions organized among students.

Apart from organizing literary activities, like essay and drawing competitions, school children from the fringe villages of the Pakke Wildlife Sanctuary and Tiger Reserve were taken inside the Pakke Tiger Reserve for nature and bird watching.

They were also briefed about the bear rehabilitation process at the Centre of Bear Rehabilitation and Rescue Centre (CBRC) by the officials of the Wildlife Trust of India (WTI), which gave a glimpse of the critically endangered Asiatic black bear and the need for its conservation.

ADC TR Tapu, who attended the closing ceremony, encouraged the students to start their conservation activities from home by taking up small initiatives towards the conservation of natural resources.

The festival was earlier inaugurated by Pakke-Kessang MLA Biyuram Wahge. The MLA encouraged the students to participate in the literary competition organized by the festival committee, which he said would encourage other children of the region to incline towards conservation of flora and fauna.