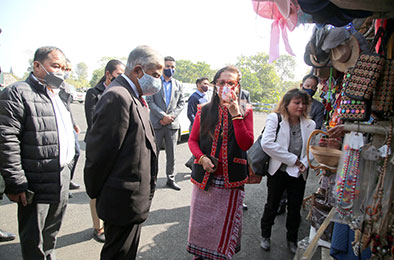 Mawlynnong village was awarded the title of the ‘cleanest village in Asia’ by Discover India in 2003.

The governor, who is on an official tour of Meghalaya to attend the 69th plenary of the North Eastern Council, visited the village and interacted with the inhabitants and officials.

The governor was impressed by the 100 percent literacy rate of the villagers and the highly progressive role of the village’s women to showcase their village “as an acme of neatness.” He suggested to the Arunachal government to “provide an opportunity to tour the Mawlynnong village and see for themselves.”

“This is the benefit of the village folk being individually and collectively responsible and conscious towards area cleanliness and hygiene,” he said. (Raj Bhavan)