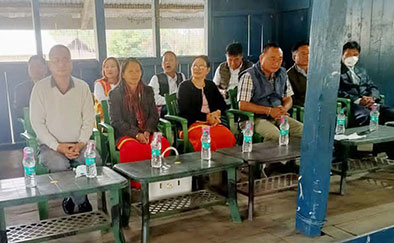 RUKSIN, 25 Jan: An amount of Rs 4 lakhs was handed over to the village authorities here by Pasighat West MLA Ninong Ering on Monday for carrying out protection work against erosion caused by the Depi-Deren river at Depi and Depi Moli villages in East Siang district.

The fund was sanctioned under the state government’s flood relief and rehabilitation scheme for 2020-21 and forwarded by the East Siang district administration.

Earlier, Ering had introduced a scheme for diverting the Depi-Deren river in order to protect erosion on its left bank. The erosion was posing a threat to several households, besides the government primary school and a church in Depi village.

Following the MLA’s suggestion, the villagers diverted the river’s flow towards the right and controlled the erosion.

The MLA later spoke to the gaon burahs of Depi and Depi Moli, and assured to take up more flood mitigation schemes in their areas.