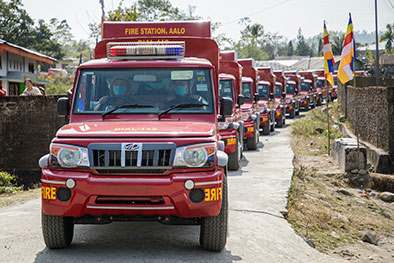 Earlier, he released the vision document 2021-26 of the fire department and the SDRF.

On the occasion, 25 police personnel serving as fire service officers and constables in the fire department were awarded the DG’s commendation discs and commendation certificates for their outstanding service in 2020.

The CM commended the police department for the release of its vision document. He termed it “a much-needed approach towards problem-solving, which will help the government understand the issues facing the department and how to address it.”

Khandu congratulated the recipients of the DG’s commendation discs and certificates, and commended their selfless service towards the people of the state.

“Welfare of police personnel and strengthening of the police department have always been a priority,” the CM said.

He said that the state government has promoted 1,600 police constables to boost their morale and to address “injustices faced by the police personnel.”

He said that the grievances over the lack of career growth and promotional scope of sub-inspectors have also been taken care of, resulting in their speedier promotion.

Speaking on his development vision, the CM said that for Arunachal to develop, “reform is the key.

“Accordingly, various reforms have been initiated in all sectors, which is as per the advice from PM Narendra Modi himself,” said the CM.

Responding to a public memorandum, the CM assured to upgrade the local police station here.