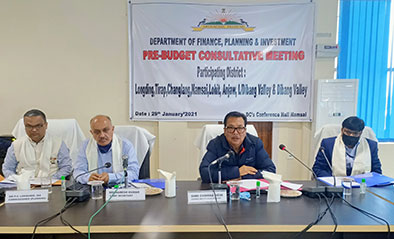 NAMSAI, 29 Jan: The state government started the regional pre-budget consultative meeting from Friday in an effort to incorporate region-specific proposals in the coming state budget.

The DCM said that despite the economic crisis due to Covid-19 pandemic, the finance and planning department has been able to clear a backlog of Rs 1,900 crore pending liabilities.

“We have also taken a bold decision to upgrade district hospitals and to build robust health infrastructures worth Rs 400 crores across the state,” the DCM said.

He stated that, though the state government was unable to implement the last budget announcement of the present financial year, “we have not compromised on major developmental works, nor cut salaries of the government employees as done in some other states during the pandemic.”

He urged the members present to emphasize on livelihood and income generating activities like agriculture and allied sectors, food processing units, tourism, etc. He also gave priority on tapping the natural resources of the state like mines and mineral resources, hydropower, etc, in order to make the state self-reliant.

Chief Secretary Naresh Kumar called for accelerating the development process in the next 3-5 years to come at par with other states of the country.

“We must emphasize on social sectors like health and education, besides road, agri-horti and tourism, etc,” the CS said, and added that all the proposals placed in the meeting would be incorporated in the budget document to present the best budget for the year 2021-22.

Planning Commissioner Prashant Lokhande said: “Earlier there was huge developmental gap due to poor connectivity in the eastern belt of the state, but the region is opening up now with the improvement of surface road connectivity in the last few years.”

He urged the departments to concentrate more on income-generating activities and to build the state’s own resources. He said that “though all the proposals may not be incorporated in one year, some will be taken up in a phase-wise manner in the remaining three years.”