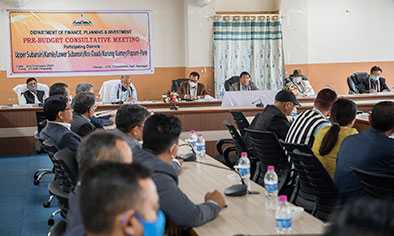 He was addressing the regional pre-budget consultative meeting for the Upper Subansiri, Kamle, Lower Subansiri, Kra-Daadi, Kurung Kumey and Papumpare districts on Tuesday.

During the meeting, Khandu requested the officials to prepare a realistic budget and ‘not an exaggerated one that would have no guarantee for success.’

The CM stressed on adopting the policy of convergence of schemes to enhance growth and development outcomes. He called for a paradigm shift in the way development is planned moving away from expenditure-oriented projects to outcome-oriented works. He suggested that the ‘Clean Itanagar’ mission be taken up and schemes dovetailed and converged for an effective outcome.

To boost performance of various centrally sponsored schemes (CSS) in Arunachal, the CM urged the departments to achieve the target of implementing schemes worth Rs. 5000 Cr in the state.

Expressing optimism, he said that despite the Covid-19 challenges, the state government in the previous year could achieve the target of over Rs. 3500 Cr.

“The union budget this year has provided a major boost towards infrastructure,” the CM said while expressing the hope that Arunachal would also be a part of this great push.

He, however, expressed concern over the poor ‘absorption capacity’ of the government departments that impedes in fully utilizing the funds provided by the centre.

CM suggested that the government officials be trained and motivated to perform.

Earlier, deputy chief minister Chowna Mein said that the annual budget is the most important document to accelerate and formulate a people-friendly, realistic and need based budget reflecting the aspirations and hopes of the people of respective districts.

The DCM further said ‘the state government aims to present the best budget ever prepared in the history of Arunachal.’