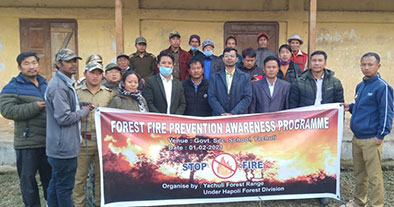 YACHULI, 2 Feb: With Yachuli area of Lower Subansiri district being prone to forest fire, the PRI leaders and Gaon Burahs (GBs) appealed to the higher authorities to take precautionary measures to prevent the calamity.

They said forest fires occur every year in Yachuli area during February, March and April.

“There is sufficient degraded Jhum lands within Yachuli and Mai village areas where afforestation drive can be taken up in collaboration with the locals to protect the undisturbed forest area,” the PRI leaders and the GBs said during an awareness meeting on forest fire at Govt. Secondary School, Mai village  here on Monday.

Yachuli EAC Tana Yaho appealed to the people to be pro active on forest fire to save natural vegetation so that residents of neighboring villages can get sufficient water by protecting the local catchment areas. She requested the forest department to carry out afforestation drive in the barren lands of Yachuli and Mai area to avoid encroachment activities on government land.

Being informed that the people of Mai village have restricted hunting and poaching within Mai Panchayat jurisdiction, DFO Abhinav Kumar commended the initiatives of Mai Natural Resources Preservation Committee.

Kumar informed that the creation of Migo-Joram Village Reserve Forest under Yachuli range is under process and should be done within this year. He also highlighted the importance of prevention of forest fire and explained to the public about government schemes related to the forest department which the villagers can avail.

The DFO informed that a series of awareness programmes on forest fire will be conducted in different villages under Yachuli and Yazali area during this month.

The awareness meeting was organized by Yachuli Forest Range under Hapoli Forest Division at the direction of Lower Subansiri DFO and in collaboration with Yachuli ADC. (DIPRO)