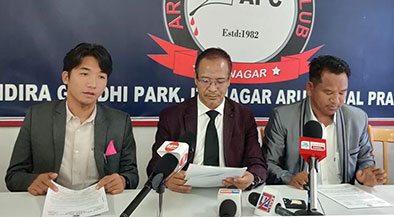 ITANAGAR, 2 Feb: Strongly condemning the brutal ‘physical assault’ on one- Likha Nem by alleged accused Riya Tabing, the Likha Welfare Society (LWS) has demanded that the accused is not granted bail till exemplary punishment is served.

Likha Nem (23) was earlier attacked on 24 January by the accused with a machete, leading to serious injuries. The left hand of the victim was brutally chopped off by the accused due to which she was later referred to Apollo hospital, Guwahati from Tomo Riba Institute of Health & Medical Science (TRIHMS).

An FIR was registered on the next day of the incident and accordingly case was registered at Nirjuli police station vide case No. 08/2021 U/S 307/326 IPC.

Addressing reporters at the Press Club here on Tuesday, LWS general secretary Likha Tech said that the accused has been arrested by the police a couple of days before.

“We however, want the authorities to not grant bail to the accused for such a heinous crime,” he added.

“We are thankful to the police for the early arrest of the accused, but at the same time we want the accused not released on bail,” he said adding that ‘if any person applies for the bail, the society shall presume that the person is also involved in the case.’

He also said that the society will pursue its own course of action against any person found filing a bail petition for the accused.

“It’s not about our sister but this can happen to anyone at any moment of life. Therefore, we request everyone to condemn such acts and support the victim’s family for early justice,” he said.

LWS chairman NL Kamin while condemning the person involved in sheltering the accused before his arrest, requested the police to book those persons under appropriate provision of the law.

“The victim is presently struggling for her life at Apollo hospital, she has undergone multiple operations and her condition is still critical, ” he said.

Kamin appealed to the police to investigate the case in a fair way and accordingly punish the accused as per the law. He said the accused should not be granted bail till the punishment process is completed.

Meanwhile, a special police team formed by Superintendent of Police (SP) Capital, Jimmy Chiram arrested the accused who had been absconding since the incident.

Under the guidance of SP capital (In-charge) Neelam Nega, a team led by SDPO Rike Kamsi, Inspector M Geyi and others arrested the absconding accused Riya Tabing from the jungles after a massive manhunt during the night.

Nega informed that it was extremely difficult to lookout for the absconding accused as he was hidden in the deep jungle and was frequently changing phones.

While congratulating his team for their efforts, Nega informed that the said accused has a history of violence against women. He is a charge sheeted criminal at Koloriang Police Station in the ‘attempt to murder’ case of his first wife in 2015.

“Arunachal Pradesh Police resolves to provide a safe environment for women and will put all efforts to ensure his (accused) conviction,” he added.