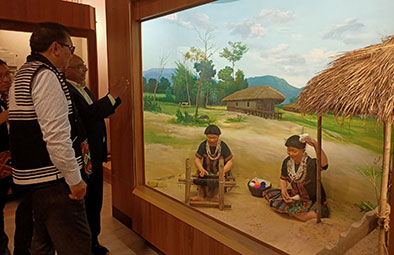 ROING, 5 Feb: “Films will help promote tourism in the state by attracting tourists from all over the world,” said Deputy Chief Minister Chowna Mein after releasing a feature film titled Roing – The Valley of Love and Brotherhood, during a programme here in Lower Dibang Valley district on Friday.

The film, produced by senior public leader Dature Miuli and directed by local filmmaker Darbom Tayeng, is aimed at creating communal harmony between the two major communities of the district, ie, the Adi and the Idu Mishmi tribes.

Lauding the effort of the filmmakers, Mein said, “Arunachal being home to 28 major tribes, our strength lies in unity in diversity.” He said that the movie, which is based on communal harmony, “is a very relevant one and will send a message of unity and brotherhood among different ethnic groups of the state.”

He said that, besides being a state with many tribes, Arunachal is bestowed with natural beauty and biodiversity, “which is a potential destination for tourists and filmmakers.”

Citing the examples of Bollywood movies like Koyla and Rangoon, which were shot in Tawang and East Siang, respectively, the DCM informed that another Bollywood movie is going to be shot in Sagalee soon.

Speaking about potential tourist hotspots, he informed that Rs 8.5 crore was sanctioned two years back to develop Mayudia Pass as a major tourist destination, the work on which is undergoing. He also suggested creating a tourist circuit comprising Namsai, Lohit, Anjaw, Lower Dibang Valley and Dibang Valley districts.

Later in the day, the DCM visited the Research Institute of World’s Ancient Traditions Cultures and Heritage (RIWATCH).

He lauded the activities undertaken by the RIWATCH in preserving and promoting the rich cultural heritage of the local communities by working with them, besides conducting research and education.

Mein informed that “the second phase on documentation of traditional healing system by the Igu/priest of Idu-Mishmi tribe shall begin soon.”

The DCM also visited the oldest archaeological site in the state, Bhismaknagar, in Lower Dibang Valley district, which dates back to the 10th to the 12th century AD.

He asked the Lower Dibang Valley DC to prepare a detailed project report “to rejuvenate Bhismaknagar into a major tourist destination.” Mein also informed that the government of India has sanctioned Rs 37 crore for infrastructure development at Parshuramkund, work on which, he said, will begin soon.