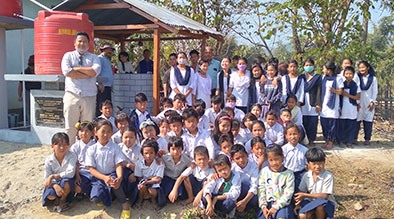 DIPIK, 5 Feb: As part of a crowdfunding initiative of the APCS officers of the 2016 batch, a ring well-cum-water supply project for the government upper primary school here in Pakke-Kessang district was inaugurated on Friday.

After inaugurating the project, Seijosa ADC TR Tapu expressed appreciation for the effort and said that the young officers were leading by example. He urged the school’s authority to maintain the asset properly.

The headmaster of the school, Rana Chiri who assisted in the execution of the project, thanked all the 2016 batch officers and said the project would inspire his students to work for the society.

He said that now the school will have access to clean water throughout the year for drinking as well as for hygiene and sanitation.