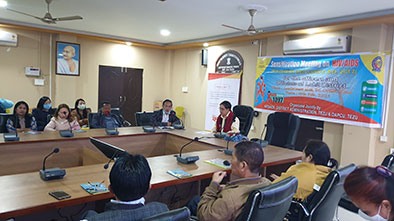 Sora that there should be good coordination among the various departments “so that government policies and programme reach the target beneficiaries.’

The DC appreciated the Arunachal Pradesh State AIDS Control Society (APSACS) for enlightening the districts HoDs on the very important issue of HIV pandemic and its prevention and control measures for the welfare of People Living with HIV (PLHIV).

Attending the programme as the resource person, APSACS Deputy Director (IEC) Tashor Pali said that the objective of the HIV/ AIDS Act is correctional in nature and does not aim to penalise people.

“There are very few provisions under the Act which draw penalty,” he said and added that the correctional measures include withdrawal and rectification of wrong acts, counselling of the violator, placement in an NGO, social work, etc,” he informed.

Pali said the Act also aims at addressing the stigma and discrimination attached to HIV and creating ‘an enabling environment  for enhancing  access to services, safeguarding rights of PLHIV and those affected by HIV.’

“The purpose is to bring behavioural change and a gradual shift towards a positive outlook for PLHIVs,” he added.

Tezu DMO Dr C L Manchey said that the participation and cooperation of other line departments are very important to implement the health programs successfully.

The meeting was organised by the APSACS, Naharlagun, wherein the heads of various departments and officials of the district took part.