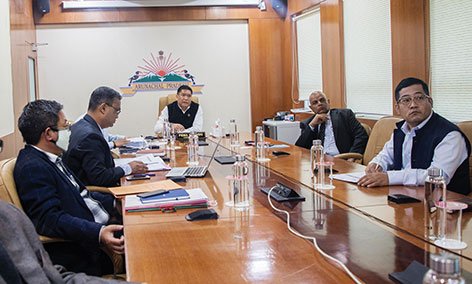 ITANAGAR, 10 Feb: Chief Minister Pema Khandu sought the latest updates on the Joram-Koloriang part of the trans-Arunachal highway during the first monthly monitoring meeting of Arunachal e-Pragati on Wednesday, and said that it was “not satisfactory.”

Chairing the Arunachal e-Pragati meeting through a virtual conference with concerned deputy commissioners and field officers, he called for monthly progress reports and joint inspections by concerned authorities.

He also flagged the Miao-Vijaynagar road and sought early completion of the same. He said the Governor’s Office is monitoring the project and “no inordinate delay in completion will be tolerated.”

Arunachal e-Pragati is a novel concept that will enable the chief minister to personally monitor progress of important projects and schemes of both the state and central governments.

The concerned deputy commissioners and field officers will be directly answerable to the Chief Minister’s Office (CMO) regarding the progress of all projects and schemes that will be flagged-off by the CMO in advance.

“Please remember Arunachal e-Pragati is not a review meeting. This is a monitoring meeting and all concerned officers, including those executing government of India projects, will be answerable. Therefore, your personal involvement in execution and monitoring is needed,” Khandu asserted.

The chief minister also reviewed the status of the under-construction greenfield airport at Hollongi; establishment of Ekalavya Vidyalayas, with five of them said to be under construction; upgrade of district hospitals; requirements of TRIHMS, Jal Jeevan Mission, development of Parashuram Kund, e-Office set up of various government departments, PMGSY roads, etc.

He took serious note of non-performing districts, particularly in PMGSY and Jal Jeevan Mission. He directed the concerned deputy commissioners to regularly monitor these projects by physically inspecting the work sites.

While seeking status report on cluster farming scheme of the government, Khandu invited suggestions to improve its implementation from the field officers and district administrations.

“Send in your comments and suggestions. Go for corrective measures,” he advised.

Addressing the deputy commissioners, Khandu said their office is of utmost importance for successful completion of projects and implementation of welfare schemes. He urged them to “take ownership of all government projects and schemes” and constantly monitor them.

“In case of local hindrances or issues, take these up with the local legislators by keeping them in loop,” he suggested.

Khandu also directed them to regularly update the status of the projects on e-SamikSha, an online monitoring portal which is monitored directly by the PMO.

Meanwhile, official sources informed that the Arunachal e-Pragati shall be hence held on every third Monday of the month that will allow time to the line departments to prepare for the meeting and facilitate meaningful and purposeful monitoring. Departments will be intimated of the projects and schemes to be reviewed by the chief minister on the first working day of the month.

List of projects shall be consolidated and updated at regular intervals by the department of Planning in consultation with CMO for monitoring.

The department of Planning and Investment will be the nodal department and coordinate the overall conduct of the meetings.