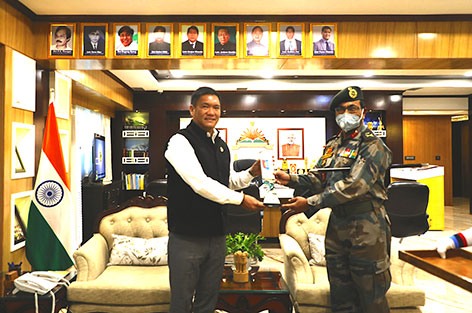 Bhuyan, who called on Chief Minister Pema Khandu here on Sunday and discussed various NCC-related issues, said an independent group headquarter, which is headed by a brigadier, within the state will be a major boost to NCC activities.

The ADG, who will be visiting the Itanagar NCC unit on Thursday, said Arunachal Pradesh is on top priority with regards to the countrywide expansion of NCC.

The ADG informed that an NCC academy is in the pipeline for the state at Balijan in Papum Pare district.

“The academy couldn’t take off due to the pandemic. Now the pandemic is under control, the project may soon start,” he said.

Bhuyan also suggested that the state government may introduce awards for cadets who excel in NCC activities, which will boost their morale.

He further suggested that job incentives may be given to cadets holding various NCC certificates.

The chief minister endorsed the suggestions and informed that the state government has already directed the nodal department to chalk out a detailed policy for recruitment of trained NCC cadets in government jobs. On the introduction of awards for cadets, he assured the government will soon work out a plan to do so.

There are three battalions of NCC in the state at Itanagar, Tawang and Pasighat, the last one being under independent command. (CM’s PR Cell)