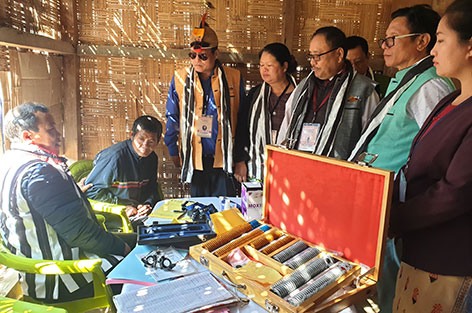 TOMPURIJO, 12 Feb: The Arunachal Pradesh Building & Other Construction Workers’ Welfare Board (APB & OCWWB) Chairman Nyato Dukam said that that the board will be overhauled as there have been several anomalies in the past, which need correction.

Addressing a meeting here in Kamle district on Friday, Dukam said that “everything has to be streamlined and I will not allow what had happened earlier”.

“The board has several beneficial schemes and workers of the organized and unorganized sectors should get themselves registered in their respective district with Labour Officer/Research officer to avail the schemes,” he said.

He informed that the accidental death benefit for workers has been enhanced up to Rs 4 lakh; amount for last rite has been enhanced to Rs 10, 000 and that there are scholarship schemes for children of workers who have passed CBSE class XII.

Dukam also announced to provide a sum of rupees one crore fifty lakh for construction of labour office and labour barrack at Raga and added that the recently completed labour barrack at Kumporijo will be handed over to the workers soon.

Raga MLA Tarin Dakpe in his address said, “Kamle district is a new-born baby and everyone has to support it for progress and development of the district.”

He urged upon the PRI leaders to support the district administration and government so that the developmental works go in the right direction.

The programme was organized by state women’s wing of the All Arunachal Pradesh Workers Union (AAPWU), in collaboration with the board.

Water filters, radio sets and raincoats were distributed to the workers on the occasion.