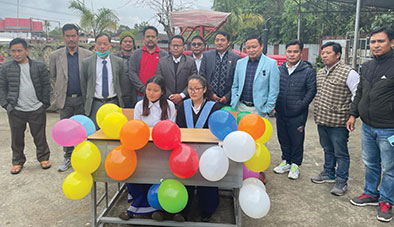 ITANAGAR, 17 Feb: “The old furniture of all the government schools of Liromoba constituency will be replaced in a phase wise manner,” local MLA Nyamar Karbak said.

“We will try our best to complete this process by the end of this year,” Karbak said as he appealed to the education minister to not sanction any more funds for wooden benches and desks for his constituency.

Karbak, who inaugurated the new furnishing in the presence of Kamba ADC R Rakshap, DDSE Eto Ete, ZPC Babom Romin and other dignitaries said, “my vision is to make the schools of Liromoba constituency free of wooden desks and benches as they are less durable and unsightly, and to replace them with steel ones.”

The legislator further informed that funds to procure the new steel desks and benches for the Kamba Government Higher Secondary School were managed from different sources, including his local area development fund.

Karbak, along with the support of the local officers, public leaders, and well-wishers had earlier managed to make all the government schools of the constituency blackboard-free. The blackboards of the schools were replaced by whiteboards.