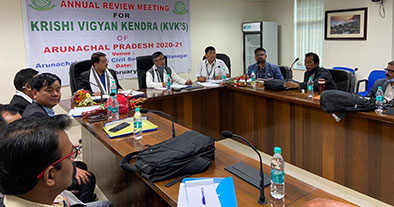 ITANAGAR, 17 Feb: Minister for Agriculture and allied departments, Tage Taki called upon all the scientists and the heads of the Krishi Vigyan Kendras (KVKs) in the state to be proactive and sincere in carrying out the mandates of KVKs for transfer of new technologies to the farming community.

Taki stressed on proper coordination between KVKs, agriculture and allied departments at the district level for effective transfer of farm technologies to the farmers.

The minister on Wednesday reviewed the activities of the KVKs in a meeting with the scientists, heads and representatives from various KVKs in Arunachal Pradesh and senior officers from the agriculture department.

He urged the scientists to identify district-wise agro-ecosystem zones (AES) and recommend suitable crops to be grown in such AES for enhancing production and productivity to meet the food and nutritional requirement of the state.

“A five-year perspective plan needs to be prepared by each KVK to work on this aspect,” he said, adding that “the innovative proven technologies, like salt and mineral licking block technology for mithuns developed by the KVK, Anjaw, solar fencing for farmlands, fish hatchery by KVK, East Siang, eggs and chicks hatchery by KVK, Namsai etc should be replicated in the other KVKs for effective transfer of such proven technologies in a greater way for the benefit of the farming community.”

The minister assured that he would take up the constraints faced by the KVKs as per MoU with the state government. He also said that Chief Minister Pema Khandu is giving priority to the development of agriculture sector in the state.

Guwahati-based Agricultural Technology Application Research Institute’s Principal Scientist, Dr R Bordoloi advised all the scientists and heads to be proactive so that the mandates and objectives of KVKs could be achieved in due course of time and maximum benefits could be given to the farming community of Arunachal Pradesh.

Earlier, the scientists and heads of various KVKs gave presentations on various activities and innovative agricultural technologies undertaken in their respective districts for the last three to four years.

They also highlighted various problems faced by them while carrying out mandates of the KVKs.