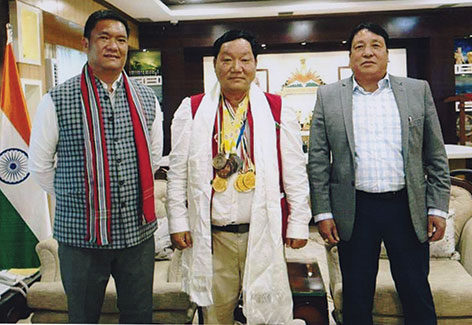 He won the first positions in three swimming events-50mtr and 100 mtr free-style and 50 mtr back stroke in the 55-year-plus age category. Lida also won the singles and doubles table tennis titles in the 55-year-plus and 50-year-plus categories, respectively. The event was held on 11 and 12 February.

Importantly, he made all these achievements without any financial help from the government.

Lida has been selected for the World Masters Games-2021 to be held in Kansai, Japan from 14 to 30 May, for which he has to deposit Rs 32,000 as entry fee, visa fee, conveyance fee and MGF fee, excluding his personal expenses on dress and equipment etc.

As he hails from a poor economic background, Lida is facing financial problem in managing the necessary amount to participate in the event, said MLA Rode Bui.

The MLA, on behalf of the athlete (Lida), appealed to the government and like-minded NGOs to support him financially so that he could participate in the Japan event and bring more laurels to the state.

As per the Masters Games Federation, approximate expenditure for the trip will be in between Rs 1.5 lakh and Rs 1.9 lakh, excluding local conveyance and food etc.