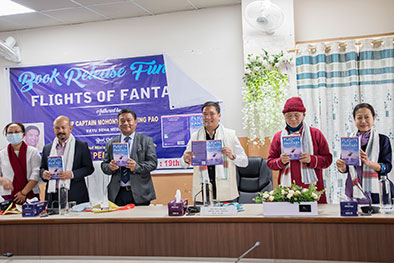 ITANAGAR, 19 Feb: Arunachal Pradesh Chief Minister Pema Khandu on Friday reiterated that school textbooks should contain chapters on Arunachal Pradesh, its history and culture, so that students grow up knowing about their state and its past.

Speaking at the launching ceremony of the book ‘Flights of Fantasy: Heroes of 1962 Indo-China War, Abu Tani’s Speaking Tree and other articles’, authored by Group Captain (Rtd) Mohonto Panging Pao, here today, Khandu said about 80 to 90 percent of the people are not aware of the state’s history and its rich cultural diversity.

He said it is his government’s priority that the younger generations are made aware of their own state and its cultural diversity from the very early stage.

“I have already instructed the education department to compile and introduce chapters on the state in the primary level to begin with,” he informed.

Further, informing that the general council meeting of NITI Aayog is scheduled for Saturday that would be chaired by the prime minister, Khandu assured he would urge for inclusion of the history and culture of the north-eastern region in the NCERT syllabus.

“If done, people from outside the region would come to know about the rich history and culture of the North East. Unfortunately even today most of the people of other states are unaware of the North East, its contributions to the freedom struggle and its rich cultural diversity,” he said.

Lauding the author, Group Captain (Rtd) Mohonto Panging Pao, the chief minister observed that the book, which is a collection of articles on Arunachal Pradesh, unsung heroes of the 1962 war and folklores, would go a long way in educating not only people of the state but others too on Arunachal Pradesh and the North East.

Citing the recent laying of foundation stone of the memorial of Major Ralengnao ‘Bob’ Khathing at Tawang, Khandu said till the time of the event, 90 percent of the people, including those in Tawang were not aware of Bob Khathing or his contributions to Arunachal Pradesh.

“There would be many unsung heroes like Major Khathing, we need to honour them and write about them so that people recognize and appreciate their contributions to our history,” he said.

‘Flights of Fantasy: Heroes of 1962 Indo-China War, Abu Tani’s Speaking Tree and other articles’ contains 91 articles in 10 chapters penned by Group Captain (Rtd) Mohonto Panging Pao in five years. Most of his articles were earlier published in leading newspapers of the state.

The book is a collection of 91 selected articles published in various newspapers and magazines of Arunachal Pradesh and the North East. The book covers socio-economic aspects, geo-political aspects of Arunachal and Northeast. The articles also cover aspects associated with fighter flying based on the author’s personal experience.

This is the second book authored by Group Captain Mohonto Panging Pao. He has already published a book titled ‘Keerook and Other Stories from Northeast India’.

The book can be ordered from Amazon, Flipkart and notionpress.com