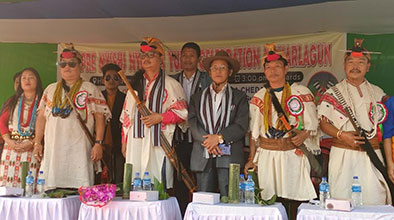 NAHARLAGUN, 19 Feb: Arunachal Publisher and Broadcasters Guild (AP&BG) president Chopa Cheda on Friday called for discouraging pre-Nyokum and post-Nyokum celebrations, especially without performing any rituals by priests, and said that “such practices will misguide the Gen Next.”

Attending a pre-Nyokum festival celebration at the helipad ground near here, Cheda said that the pre-Nyokum celebration is setting a wrong trend to the entire youths of the Nyishi community. However, he also said that, even if celebrated, it should follow the age-old rituals and customs.

“Celebrating Nyokum in the state without a priest is not exactly how it should be celebrated. Moreover, most of the Nyokum celebrations these days have become business-oriented,” he said, adding that

the Central Nyokum Yullo Celebration Committee (CNYCC) and Nyishi Festival Council (NFC) should take initiatives so that no Nyokum is celebrated without a priest.

The organizations should also check the high price of commodities being sold in the stalls during Nyokum celebration, he added.

Cheda also requested the people to avoid the culture of donation for celebrating such festivals.

Calling for preservation of the age-old tradition and culture of the Nyishi tribe, Cheda requested the community members to promote and use original local ornaments instead of those available in Harmutty market.

Cheda also inaugurated the local food stalls and volleyball matches on the occasion.

Social worker Dobing Sonam, who attended the function as guest of honour, exhorted the people to preserve and promote tribal festivals.

Meanwhile, Pre-Nyokum Yullo Celebration Committee chairman Kipa Simi informed that this is the second celebration being organized by the committee.

He also informed that cultural events such as football and volleyball and sports activities have also been planned for the extravaganza.

Overall-in-charge of the event, Rohit Bagang assured to include priests in the celebrations next year.