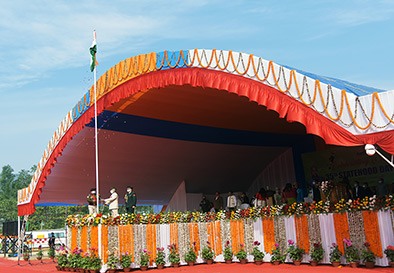 ITANAGAR, 21 Feb: Arunachal’s 35th Statehood Day was celebrated throughout the state in a befitting manner on 20 February.

In Itanagar, Governor BD Mishra unfurled the national flag at IG Park and took the salute of the guard of honour.

In his address to the people, the governor sought cooperation and contribution by the citizens for the progress of Arunachal.

Speaking about Covid-19, he commended the frontline workers for the state’s record of maximum recovery rate and minimum mortality rate.

“In the last four to five years, due to the involvement and sincere endeavour of the Pema Khandu government, notable progress has been made in the state,” he said.

The governor meanwhile expressed concern over drug addiction and the gun culture, and urged the people to join hands in the fight against the two menaces.

He also said that welfare measures for women, children and youths should be implemented in letter and spirit. Stating that the youths of the state have huge potential, the governor advised the youths to “strive with progressive mindset to become entrepreneurs,” particularly in the agriculture and allied sectors.

While the state government had in the previous year concentrated on the health sector, “this year the focus will be on education,” he said.

“The new education policy has given a great opportunity to rejuvenate the education sector. With Rs 400 crores investment over a period of three years, the state will definitely see better quality of education,” Mishra said.

Chief Minister Pema Khandu in his speech saluted the jawans of the armed forces, the state police and the paramilitary forces for their selfless service to the state.

“Today, when the world is a global village, we must as a society adapt and change our outlook and mindset. This is the only way Arunachal Pradesh can find our rightful place in the nation and the world,” Khandu said.

Expressing appreciation for the frontline workers and doctors, the CM paid homage to the Covid-19 warriors who passed away in the line of duty.

“We are proud of the fact that two ‘made in India’ vaccines are now available for Covid-19. We will keep on working hard to ramp up our capacity for covering more and more population for vaccination as per the guidelines of the government of India,” Khandu said.

While the state government has taken up a Rs 400-crore mission to upgrade the health infrastructure, “we are setting up a 100-bedded home in Mumbai for cancer patients from Arunachal Pradesh,” the CM said.

He expressed deep concern over drug addiction in the state, and informed that the state government has set up de-addiction centres to bring drug addicts back into the mainstream.

He said the government would ensure “effective and practical” devolution of powers and responsibilities to the panchayats.

“Under the CM’s comprehensive road development plan, a focused action plan to provide all-weather road connectivity to all the administrative headquarters has been chalked out,” he said, adding that work on the ambitious greenfield airport in Hollongi would be completed by 2022.

He informed that two units of 600 mw power from the Kameng project have already been commissioned, while work on the Subansiri Lower project is also going on in full speed.

Khandu also said that the state government would improve the quality of education in the state.

“Entrepreneurship development has been another focus area of my government,” he said, adding that “more than 200 entrepreneurs have benefitted from the Deen Dayal Upadhyaya Swavalamban Yojana.”

“Under the Chief Minister’s Yuva Kaushal Yojana, we have provided high-end skill development training to 210 youths from the state. A total of 164 youths have been offered jobs in aviation, tourism, hospitality and automotive sectors,” Khandu informed.

He said that the Covid-19 pandemic has taught the state the importance of agriculture. “Recently, our farmers living in the remote district of Anjaw have shown some exemplary achievement by exporting large cardamoms to the international market,” he informed.

Khandu also informed about the setting up of a National Centre of Excellence at Sangey Lhaden Sports Academy.

Khandu said that the state government has decided to honour the rich contribution made by Major Rolengnao Bob Khathing, who established Indian administrative control over Tawang in 1951, and added that “we are constructing a museum in Tawang in memory of Major Bob Khathing.”

Stating that the APPSC and the APSSB have been strengthened, Khandu said that nepotism, opaque administration and disregard of the rule of law in any department would be dealt with strictly.

“Those found indulging in corrupt practices, irrespective of power or position, will be taken to task as per relevant rules and laws,” he warned.

“We are working relentlessly to achieve excellence in governance, education, better health service and progressive changes, and I believe in the mantra of people-oriented holistic development through an efficient work culture in every sphere,” the CM said.

The governor flagged off 10 ambulances, and released a book on Nyishi fables and folktales, Dojang Napong, on the occasion.

The art and culture department presented a ‘mega fusion dance’, showcasing all the tribes of Arunachal.

The celebration was attended by DC Minga Sherpa, all the HoDs, GBs and public leaders.

In his address, the ZPC said the panchayat community of the district would work to make Dibang Valley self-reliant.

Students of the JNV and the government higher secondary school sang patriotic songs.

Statehood Day was also celebrated in all administrative outposts of the district in a befitting manner.

The ZPC in his address said the HoDs should lend a helping hand in the implementation of various schemes. He advised the locals – particularly the youths – to work hard to become self-reliant.

In Tawang, ADC Lobsang Tsering unfurled the national flag and witnessed the parade by the Arunachal Pradesh Police and the students of the government higher secondary school.

The ADC appealed to the youths to utilize their “youth power for positive development of the country.”

The day was also celebrated in outpost administrative centres of the district.

In Kurung Kumey district, Upper Koloriang ZPM Bengia Tagar unfurled the national flag in Koloriang, in the presence of DC Kento Riba, HoDs, and others. He urged the HoDs, panchayat leaders and the people in general to work for national integrity, peace and communal harmony.

Games and sports and cultural activities were the highlights of the event.

In Longding, cultural programmes and sports competitions were held as part of the celebration.

One of the key attractions of the day was the display of organic vegetables from the kitchen gardens of women’s groups of Tissa.

Addressing the attendees, Longding ZPM Jehai Wangsu said he would make every effort to ensure overall development of the district.

In Papum Pare, DC Pige Ligu hoisted the national flag. The main attractions of the day were presentation of guard of honour by ITBP personnel, cultural display by cultural troupes and school children, karate and Taekwondo display by school kids, etc. The day was also celebrated in Mengio and Silsango circles.

In West Siang HQ Aalo, retired commissioner Huzar Lollen unfurled the tricolour and took salute from the APP contingent. The day was also celebrated in Kamba.

In Lower Subansiri district, DC Swetika Sachan unfurled the national flag in Hapoli. A colourful cultural programme was presented by students of Frontier School and the Ziro VKV, and by members of the RK Revolution dance group.

In Changlang, ZPC Kapseng Kungkhu unfurled tricolour in the district headquarters and paid tributes to those who worked hard to make Arunachal a full-fledged state.

The day was also celebrated in Bordumsa and Mamao.

She awarded ADC Tatdo Borang for his commendable services to the society.

Students from various schools made a cultural presentation as part of the programme.

In Daporijo, Upper Subansiri DC (in-charge) Tago Ekke unfurled the national flag and sought the public’s cooperation for all-round development of the district. He urged the people to develop more civic sense to keep Daporijo town clean and green.

In Palin, MLA Balo Raja commended the Kra Daadi district administration for keeping the district largely Covid-19-free. He advised the officers to maintain the spirit of team work in the future too.

Various cultural and sports activities were organized as part of the celebration.

In Pania ADC headquarters, the tricolour was unfurled by ADC Charu Nili.

In Khonsa, seven government employees from various departments were felicitated with commendation certificates for their meritorious services.

Tirap ZPC Chathong Lowang, who unfurled the national flag in the presence of DC Taro Mize, highlighted the various developmental activities being carried out in Tirap district.

Plastic crates were distributed among 10 progressive farmers at subsidized rates under the Rashthriya Krishi Vikash Yojana. Various sports competitions were also organized to mark the occasion.

Statehood Day was also celebrated in Deomali, Lazu and all other circle offices of the district.

In Bomdila, West Kameng DC Karma Leki unfurled the tricolor. The DC highlighted the achievements of various ongoing development works in the district.

Cultural dance and traditional dress (both male and female) competitions, and display of various departmental exhibition stalls were the main highlights of the celebration.

In Namsai, DC RK Sharma hoisted the national flag at the APIL ground.