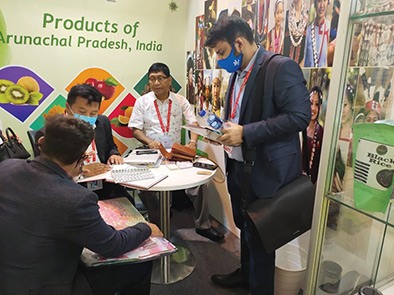 DUBAI, 21 Feb: A team from Arunachal, led by Agriculture and Horticulture Secretary Bidol Tayeng, arrived here in the United Arab Emirates (UAE) to promote and showcase the agriculture/horticulture produces in the Gulfood Show 2021 here.

Touted as the world’s biggest annual food and hospitality exhibition, the five-day Gulfood show began at the World Trade Centre here on Sunday.

“The state is focusing on its strength in products, such as turmeric, ginger, large cardamom and organic tea, apart from other fruits and vegetables,” Arunachal Pradesh Agriculture Marketing Board (APAMB) CEO Okit Palling said in a release.

As Dubai plays a major role as a re-exporter of food and food-related equipment, the state government is focusing on exporting spices from Arunachal to major players in Dubai, Palling said.

The UAE is one of the biggest markets for spices, cereals and fruits in the Middle East, he said.

Arunachal has set up a stall at the event to showcase the potential products to its potential consumers and for B2B tie-ups.

Twenty-five thousand companies from 85 countries are participating in the event, Palling said.

“There is a keen interest on products from the Northeast region of the country, and Arunachal is creating a buzz for its organic products. It is very visible from the visitors coming to the state’s stall,” he said.

“The team will engage with buyers, importers and value addition players during the five-day show and leverage a few B2B meetings, so as to create a big pull in the market for Arunachal’s products,” he said.