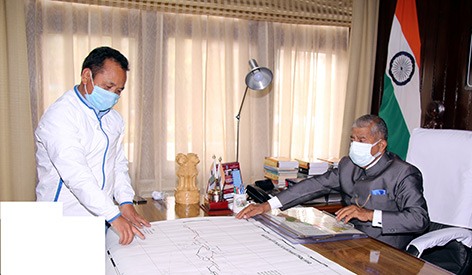 ITANAGAR, 26 Feb: Governor BD Mishra on Friday reviewed the progress of the Miao-Vijaynagar road in Changlang district with the senior engineer working on the project.

During a meeting at the Raj Bhavan, the governor said that, under the current socio-geo-strategic scene, the importance of availability of a good road between Miao and Vijaynagar has assumed added importance, “most importantly for the territorial integrity and security of the nation.”

Stating that early completion of the road has become highly pressing, he observed that “the disjointed one side and single line works approach has caused all the delay so far.”

“For this strategically important road, unless multipronged work is adopted and the work fast-tracked, this road will never see the light of day,” he added.

“The 157 km road must have five to six simultaneous points on both ends of the road, from where the road construction activity must be taken up,” Mishra suggested.

There are a number of rivulets on the route – some perennial, some seasonal – which need bridges.

The governor observed that “the contractors have not yet placed bridges fabrication order nor commenced the construction of the abutments for the launch of the bridges.

“The materials for bridges must be ordered in advance and abutments must be prepared now, so that bridges are launched as soon as possible,” he advised.

He suggested to the rural works department (RWD) to take advantage of the expertise of premier road construction organizations like the Border Roads Organization “for tackling the challenging issues in the construction of the Miao-Vijaynagar road.”

The governor advised the engineers and all stakeholders to make concerted efforts to complete the road project, which he opined would boost, inter alia, tourism in the state and go a long way in protection and conservation of the flora and fauna of the Namdapha National Park and Tiger Reserve.

RWD EE Nyamar Rike briefed the governor on the progress of the Miao-Vijaynagar road, which has been taken up under the Pradhan Mantri Gramin Sadak Yojana. (Raj Bhavan)