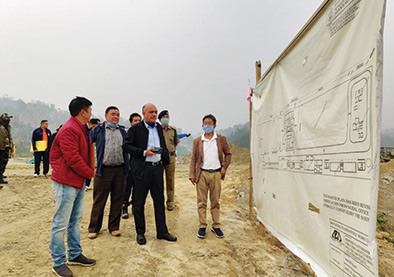 HOLLONGI, 27 Feb: Chief Secretary Naresh Kumar along with Disaster Management Secretary Dani Salu on Saturday visited various ongoing projects, including the greenfield airport and the NDRF and SDRF headquarters, here in Papum Pare district and reviewed the progress of works.

Officials of the NDRF, the SDRF and the airport made detailed presentations on the activities being undertaken by them. Officials of the public works, power and land management departments also briefed the CS on the various works being executed by them.

Later, the chief secretary visited the organic cluster farm and the Van Vigyan Kendra of the State Forest Research Institute in Chessa, and the farm of one Tana Yami in Sonajuli.

Speaking to the press, Kumar said that the construction of the greenfield airport and the headquarters of the NRDF and the SDRF is progressing smoothly.

“The state government is committed to complete the Hollongi airport by August 2022. Four-lane highway to airport, water supply, boundary wall, power transmission, etc, is being taken care of by the state government. The runway, which is under the Airports Authority of India (AAI), is also making desired progress,” said Kumar.

However, he did accept that work on the NDRF headquarters and the airport terminal has been delayed.

“NDRF officials told us that, due to Covid-19 the work was delayed.

The contractor is from outside, and therefore faced problems in managing labourers. The NRDF has assured to complete the first phase of work within the next six months,” said the CS.

Regarding the airport terminal building, he informed that the tender process was cancelled by the AAI “due to technical issues and the project has been re-tendered.” He also declared that the state government would develop the Van Vigyan Kendra of the SFRI in Chessa as “one of the best in the whole Northeast region.”