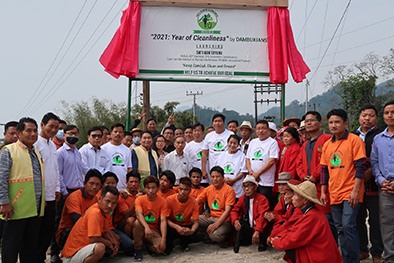 DAMBUK, 10 Mar: The community initiative by the people of Dambuk, ‘2021: Year of Cleanliness’, to make all the villages under the circle clean and green, was launched by Dambuk MLA Gum Tayeng here in Lower Dibang Valley on Wednesday.

ADC Dambuk Sibo Passing informed that the declaration of the initiative was made by the denizens of Dambuk on the occasion of Statehood Day this year.

“Today we are surrounded by all kinds of infrastructural development, but this development is not complete

without cleanliness around us,” Passing said.

Keeping up with the theme, no single use plastic items were used during the programme. Instead, bamboo mugs were used to serve water and tea out of jugs and kettles.

ZPM Dambuk Toni Borang said, “If Mawlynnong in Meghalaya, and Kabu village in West Siang district can do it, why can’t we? We had no road connectivity earlier and were surrounded by water from all sides. Many people have lost their lives because of this reason. Today, we are very well connected with the rest of the world. Our orange festival and our oranges have made our small town known worldwide, and that is a wonderful opportunity for any village. Making a cleaner, greener place will be even more attractive to tourists or other outsiders.”

Saying that the circle is fortunate to have young and energetic officers, Borang pressed on utilising their enthusiasm “for a better Dambuk and for overall development.”

As a mark to the recently passed air gun surrender order in the state, six public leaders from the area came forward and surrendered their air guns during the programme at Poblung Musup.

“Our wildlife should be safeguarded and hunting should be discouraged,” said MLA Gum Tayeng.

She opined that marriage ceremonies should be conducted only with four squirrels and a jug of the local alcoholic beverage.

Encouraging the people to move towards achieving their objective of clean and green Dambuk wholeheartedly, Tayeng said, “If you cut one tree, remember to plant five more. Use flowering plants or trees for fencing your compounds for beautification.”

DC Roing KN Damo lauded the people of Dambuk for undertaking the historic programme and said, “Keep mountains clean and green,” which is his campaign for making LDV plastic-free.

He appreciated the people for cooperating in the air gun surrender movement and also prohibiting use of non-traditional methods of fishing in the rivers of the area.

AE PHE & WSD (Dambuk) Tajing Darang spoke about different types of wastes and explained in detail to the villagers about plastic waste and its implications on the environment.

“Our motto should be to totally eliminate single-use plastic as it is the most hazardous to our environment. We can start by inculcating small habits like carrying a bag when going to the market to avoid one-time use plastics,” he said.

He further informed that plans to install water ATMs is also in the pipeline for Dambuk circle.

The programme ended with an oath-taking and signing by all present. The oath was to work towards keeping the environment clean and green, and to not indulge in any kind of hunting but to protect wildlife. Plantation was also done at Dambuk general ground by the guests.