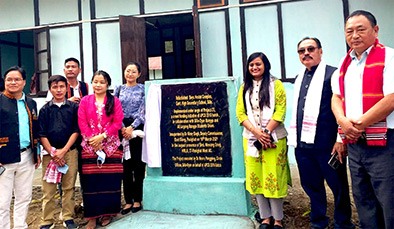 The renovation work was done under the aegis of Project-37, a crowd-funding initiative of the APCS 2016 batch officers, in collaboration with the Sille-Oyan Banggo and the All Legong Banggo Students’ Union (ALBSU).

The refurbished boys’ hostel, which was earlier in a dilapidated condition, now wears a new look with all the required amenities.

Executing Project-37 on behalf of the APCS 2016 batch, Sille-Oyan CO Dr Heera Panggeng informed that “the aim of the project was to protect the public asset and to make it functional with public support, which has been duly achieved.”

The DC lauded the collaborative initiative taken up for revamping and repairing the public asset.

“Such an asset will provide conducive environment for students and other academic activities. Such an initiative also encourages social values among the society to take up and give back to society,” the DC said.

MLA Ering also congratulated the APCS 2016 batch, all the members of the ALBSU, members of Legong Banngo and all well-wishers for the successful completion of the noble initiative.  He urged community members, students and stakeholders of Legong Banngo to protect and maintain the asset with a sense of ownership.

The MLA also informed that the state government has laid top priority to the education and health sectors in the budget.