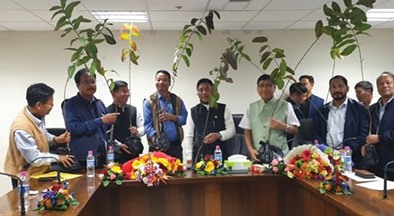 “We are working to revive government farms in the state. With the mega food park coming up near Banderdewa, there will be huge demand for produces in the coming years. Emphasis will be given on fruit plantation in the government-owned farm lands,” said Taki.

He said this while distributing Lalit variety guava saplings to the officials of horticulture department here on Wednesday.

Rs 1.25 crore free-of-cost to the department.

The saplings will be planted in various government-owned agri-horti farms across the state.

Further, the minister expressed dismay over lack of proper records of government farmland owned by the agriculture and horticulture departments. He asked officers to act responsible and protect the government land for future uses.

“Wherever government land has been encroached it should be immediately reported to the higher authorities for action,” he said.

The minister also informed that the work on the Mega Food Park is progressing in phases.

“Road connectivity is almost ready. The promoter has completed the land development. Now, in the next phase, water and electricity connection will be taken up. The state government has provided fund for it,” he said.

Horticulture Secretary Bidol Tayeng said that the Mega Food Park is expected to be completed by 2022 and it will have requirements of 2000 MT per month.

Promoter of the Mega Food Park, Likha Maj informed that the Lalit variety of guava is being distributed for backward linkage.

“We have already donated one lakh Lalit guava saplings free-of-cost to farmers in the last one year. Today, another 50 thousand saplings are being given to the horticulture department. Every year we will distribute three thousand saplings to farmers. This is being done with the hope of meeting requirements of the mega food park in the future,” he said.

Maj also shared that many companies are ready to invest in the food park and the process has already started in this regard.