ITANAGAR, 11 Mar: A six-year-old girl was found dead with multiple bruises and cut marks on different parts of her body at the private residence of one of her close relatives here in Mowb-I.

The child was staying here at one Michael Garam’s residence, along with Garam’s wife Jeemi Hangkar Garam and his brother-in-law Jeeking Hangkar.

Speaking to this daily, the relative who lodged an FIR at the Itanagar police station over the death informed that he had communicated with the caretakers of the child on 14 February through SMS, seeking report on the child’s wellbeing. In response to his message, he was informed that the child was well and good.

“To my surprise, I was informed through a phone call from Daporijo about the incident at 12:17 pm on 1 March, and I rushed to the spot and found the child dead,” he said. 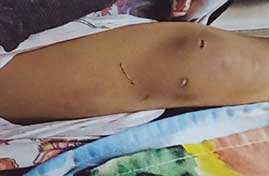 He lodged an FIR on the same day against the three alleged accused at the Itanagar police station.

In the meantime, the Dubi Welfare Society (DWS) has alleged that the deceased was brutally tortured and sexually assaulted before her death.

In a complaint to the ICR SP, the DWS informed that the child had been sent to Itanagar from Daporijo about a month before her death to live with Garam and his family, considering that they were close relatives, and in hopes that they would take care of her education as guardians.

However, her body was found on 1 March at around 12 noon, it said.

“There are bruises and cut marks all over the body of the child (some old and some new); even her private part is badly bruised. Prima facie, it is evident that she was physically and mentally tortured for several days prior to her painful death,” the society said in its letter to the SP.

The DWS has appealed to the law enforcing authority to immediately nab the culprits involved in the barbaric act, “leaving no stone unturned,” and to award exemplary punishment as per the existing law under the Indian Penal Code.

The six-year-old girl only had her father in the family, who is a farmer in Upper Subansiri district.

Itanagar Capital Region SP Jimmy Chiram informed this daily that the two men were arrested on the same day the complaint was lodged, and that Garam’s wife was arrested the next day.

“A case was registered on the same day of the incident and investigation is on in full swing,” he said.