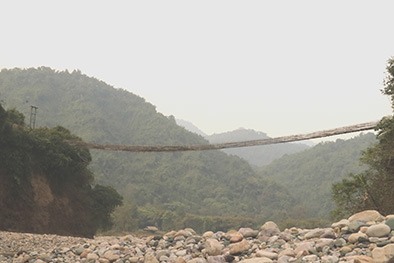 ITANAGAR, 13 Mar: The Galo Peoples’ Federation (GPF) has appealed to the authorities concerned to take urgent steps to repair the hanging bridge over the Singen river in Lower Siang district, saying that it serves as the lifeline of Tabiripo village and connects it with the rest of the world.

Earlier, members of the GPF visited Tabiripo village, in Koyu circle, and interacted with the villagers, PRI leaders, HGBs and GBs of Tabiripo, Siku, Kadu and Loglu villages.

During the interaction, Tabiripo Gram Panchayat Chairperson Elice Kaye informed that the bridge over the Singen river has been left unrepaired for many years.

The villagers further claimed that the Nari PWD division has on several occasions prepared an estimate and sent the proposal to the government for construction of the bridge but no step has been taken till date.

GPF chairman Nyadar Loya appealed to the state government to look into the matter seriously and allocate the required fund at the earliest.