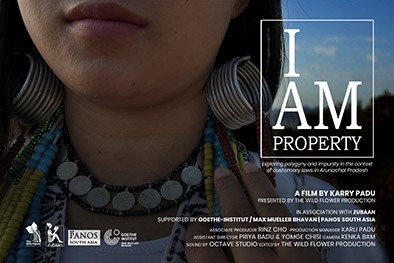 ITANAGAR, 13 Mar: A documentary titled I am property was screened at the NE Hall here on Saturday. The documentary has been produced by The Wildflower Production.

Directed by filmmaker Karry Padu, the documentary navigates impunity and polygyny in the context of the customary laws in Arunachal. It was conceptualized and produced under Zubaan’s ‘Stepping stones and body of evidence’ projects.

The film sheds light on the different communities of Arunachal in which the practice of polygyny is dominantly prevalent. It also explores the experiences of both men and women who exist and participate in the common practice of polygyny by making a statement that although a woman is the breadwinner and nurturer of the land, she does not have any rights to own land.