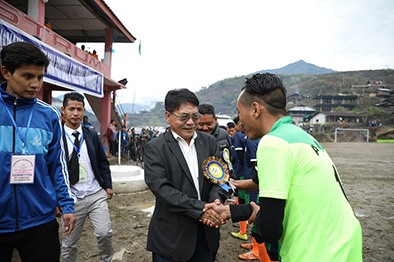 Late Sona, the father of Legislative Assembly Speaker PD Sona, was one of the first-generation politicians and social workers of the state.

He was elected to the legislative assembly in 1980 from the Mechuka assembly constituency and served as the third deputy speaker of the state assembly from 29 January, 1980 to 2 January, 1985. He also served as the deputy chairman of the State Planning Board from 1992 to 1995. He was the minister for mines & minerals and cooperation, and food & civil supplies, respectively, from 1995 to 1999.

Sona was instrumental in the socioeconomic development of the erstwhile Mechuka subdivision during his tenure as MLA.

Speaking on the occasion, Lowang commended the organizing committee’s efforts to keep the late leader’s memory alive through the event.

“Everyone dies, but we keep them alive in our memories. And it’s very commendable that you are organizing this sports tournament to honour your beloved leader,” Lowang said.

He said that hidden talents in various fields should be identified and groomed accordingly. Lowang also highlighted the importance of playing sports to stay physically fit and healthy.

Describing Shi-Yomi district as a “mini Arunachal,” where five communities are residing peacefully, the minister called upon them to work for all-round development of the new district.

Stating that his priority is to provide clean and safe drinking water to every household in the state, Lowang appealed to all to save water and refrain from activities which may destroy forests, particularly the catchment areas.

Earlier, PD Sona said that “the main objective of the tournament is to provide the youths of the district a platform to show their latent talents.” He said more such sports events will be organized in the future.

All Memba Students’ Union (AMSU) was beaten by Ruto Aao FC 3-1 in the opening match.

Bonu Diru scored a brace while Toni Diru netted one goal for the winning side. For AMSU FC, the lone goal was scored by Lakpa Gyana through a penalty.