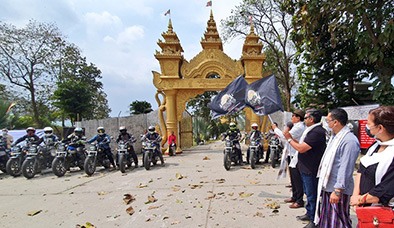 NAMSAI, 14 Mar: Deputy Chief Minister Chowna Mein on Sunday called for “focusing on the initiative of ‘Dekho apna desh’ to highlight the virgin spots in the state to attract potential tourists and promote tourism in a big way.”

He said this after flagging in the ‘Honda Sunchasers 2021-H’ness Quest for the Land of the Rising Sun’ signature motorcycle rally at the Kongmukham (Golden Pagoda) here in Namsai.

“Arunachal Pradesh has huge potential to become one of the best tourist destinationa in the country, and the state government is putting all efforts to boost the state tourism,” he said.

He lauded the tourism department and Honda Motorcycles for organizing the motorcycle rally.

“Interstates travel will strengthen brotherhood, bring us closer to one another and give us an opportunity to know each other well through cultural exchanges,” he said.