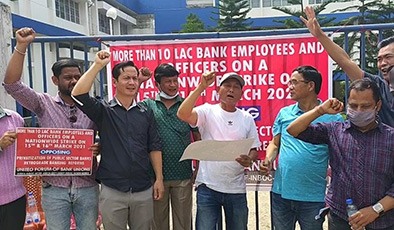 ITANAGAR, 15 Mar: Joining the nationwide bank employees’ protest against the central government’s move to privatize the public sector banks in retrograde banking reforms, the employees of the State Bank of India (SBI) here staged a protest outside the bank on Monday.

“Ever since the NDA government came into power, they have privatized most of the public sector banks. The number has gone down from 27 public sector banks to 12 only,” said All India Bank Officers’ Confederation’s state secretary Bengia Tabb.

“There is widespread apprehension that this government would gradually turn all public sector banks to private banks,” Tabb added.

“Once they are privatized, the banks would function at their whims and fancy. They would not work for the welfare of the public. But contrary to this, the public sector would be under public control or government control,” Bengia stated.

He apologized to the customers on behalf of the bank’s employees for creating the inconvenience, and sought the public’s cooperation in the movement against the central government attitude towards public sector banks.