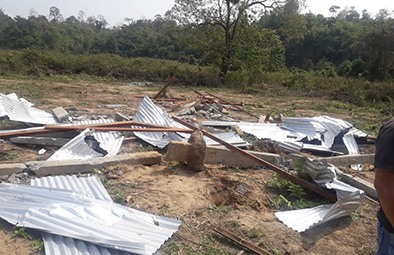 TARASO, 16 Mar: The All Papum Poma Students’ Union (APPSU) has strongly condemned the illegal eviction carried out by Assam’s forest officials along with the Assam Battalion and the Assam Police in Taraso circle of Arunachal on Tuesday.

An APPSU team visited Dolung village in Taraso circle of Papum Pare district, bordering Assam, and inspected the eviction drive carried out by the Assam forest officials with the help of a huge contingent of police and security forces and JCBs.

APPSU president Tassar Levi informed that the Assam forest officials, with the help of dozens of security forces, JCBs, tractors and labourers, illegally evicted the house in Dolung village on Tuesday morning.

The house was completely damaged, and household items and CGI sheets were taken away by the forest officials of Assam.

Condemning the act of Assam’s forest officials, the union has urged the state government and the district administration to “deal strongly with their Assam counterparts, especially with Assam forest officials, so that such inhuman act is not repeated in the near future.”

The union further demanded deployment of additional police force at the Dullung police outpost for the safety and security of the villagers.

When contacted, Balijan SDPO Dekio Gumja informed that the incident took place at around 8 am.

On receipt of information about the eviction drive in Dolung village, a police team led by the Balijan ADC rushed to the spot, but the Assam forest officials had left the scene by the time the ADC arrived.