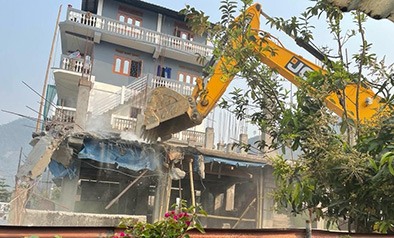 SEPPA, 24 Mar: In an effort to reclaim the government’s quarters from encroachers, the East Kameng district administration (DA) has demolished an illegal structure of an individual at Type-1 Colony of Seppa on Wednesday.

Additional Deputy Commissioner Likha Teji informed that an eviction drive was carried out by the DA after an encroacher, identified as Saju Taniang, a teacher, had allegedly constructed a double story RCC building by demolishing the government quarter allotted to him.

ADC Teji further divulged that the DA has to evict illegal structures following the ruling of the deputy commissioner’s court categorically rejecting the appeal of the petitioner on 15 March.

Earlier, the Itanagar Bench of the Gauhati High Court had injuncted the writ petition filed by the petitioner and stayed the eviction order issued on 9 March.

The ADC also issued an order on 19 March directing all heads of departments to do spot verification of their respective quarters under their pool and submit the report of encroachment or violation to the estate officer.

He also pointed out that many government staffers are subletting the allotted quarter to some other persons – either relatives or tenants.

He also stated that “my staffers have moved on transfer to another place but they still continue to occupy and hold the quarter in their name and sublet or occupy it themselves despite their transfer.”

The order also asked the HoDs to remain vigil in the matter of estate subject and update on the estate matter from time-to-time to contain encroachment and violation.